With no European football for Arsenal next season, The Gunners already inflated squad is looking even bigger. It’s time to prioritise quality over quantity and make some smart additions to the squad that will help us become a top four club again.

In this article I take a look at all Arsenal’s current first team options on loan and in the current squad and look at what changes should be made ahead of next season.

An interesting year for the keepers. Fan favourite Emi Martinez joined Aston Villa in a £20million deal and has gone on to perform at a very good level, amongst the best keepers in the league.

The Gunners then needed Leno to show the form of recent seasons and improve in his passing out from the back, but the German stopper has failed to do so. New signing Runarsson showed a worrying lack of quality in his limited outings and that saw Brighton’s Mat Ryan arrive on loan and we haven’t seen poor Alex again.

Leno has just two years remaining on his contract and there are many murmurs, even from the player himself, that suggest this season may be his last in an Arsenal shirt. I think with so much for the club to do this summer, the German would ideally stay this season and extend his contract by a year – however it looks like he may go. Runarsson only cost £1million and hasn’t looked worth that, so expect him to be sold for next to nothing, or loaned out.

Ryan has proven to be a good back up option and should be relatively cheap. He’s way down the pecking order at Brighton and with one year left on his deal I don’t think Brighton will be asking for any more than a few million. Andre Onana is reportedly set to join Arsenal for anything between £2million-£8million depending on the outcome of his appeal hearing. He’s a keeper with very good distribution and would help Arteta implement his playing out from the back style of play. Signing Ryan as well would mean Arsenal have good cover if Onana’s ban is upheld and when he goes to the African Cup of Nations in January.

Arsenal currently have four right backs, six central defenders and two left backs. They need to improve a few players in terms of quality too – so plenty will have to leave. Luiz contract is set to expire, and whilst he has perhaps been Arsenal’s most consistent central defender this season, it does appear time to move on from the 34-year-old. Saliba was sent on loan and has done well for Nice and he appears a natural replacement, albeit much more junior. Kolasinac and Maitland-Niles have spent the second half of the season out on loan and it’s unlikely either will still be at Arsenal next season.

Right-back is certainly an area where Arsenal currently have quantity over quality. Therefore I think we will see several leave this summer. First, Hector. It seems inevitable that Bellerin’s 10-year spell at the club is coming to an end. He’s one of the senior players with two years left and with that timeframe often comes a decision point. Arsenal will not want to give him a new deal and so selling him now, whilst he has some value left, seems wise. Chambers has just one year remaining on his deal but his recent form is likely to earn him a new deal and a space in the squad next season. That could come at the expense of Cedric Soares, who has dropped down the pecking order. He’s still got something to offer a bottom half Premier League club, Arsenal will hope they can recoup a few million for him. Mavropanos has had a very successful loan spell in Germany, and it could be a good opportunity to raise further funds – transfermarkt value him at £5.4m. I think Holding could stick around, but if it was my decision, I’d look to cash in and upgrade on him.

Arsenal look set to sell lots of their homegrown players, so signing top quality homegrown players will be a real bonus for the squad building. Aarons of course fits that bill. Just 21, the Norwich right-back has performed well in the Premier League and Championship for a few seasons now, so has some experience on top of his huge potential. On the left, Arsenal will want rid of Kolasinac and to bring in another homegrown player for free in Ryan Bertrand, seems an easy addition. Yes he’s the wrong side of 30, but he’s home grown and Premier League seasoned – just don’t give him a four year deal – ideally just one year would be ideal. In central defence Arsenal have a few good options, but to take this club to the next level, a serious investment in Jules Kounde would be very smart. The 22-year-old is one of the best in Europe and likely to cost around £50million, he could propel the Gunners up the table. Edmond Tapsoba is another option linked that I would be happy with as a Kounde alternative if he is not attainable.

This would give Arsenal two players for each position and pretty much a younger option and a more experienced option in all four positions across the back. I hope Arteta integrates Saliba into the squad, but he’s probably not ready to play every week. His ability to play on the left and right side of defence and integrate into a back three at times, means he’d get plenty of minutes. A signing of Kounde’s calibre would give Arsenal three top quality young, but confident central defensive options.

It’s time to go for Guendouz and Torreirai, who certainly don’t click with Arteta’s system. Reiss Nelson is another whose future seems destined to be elsewhere, whilst there’s no real need for Elneny given the reduced amount of games next season. Xhaka also looks set to join Roma in a £20million deal – it’s a real midfield clearout.

At the heart of midfield Bissouma seems the obvious choice at around £30million. He shares an agent with some current Arsenal players and has links to Gabriel and Nicolas Pepe as they have all played at Lille. As an attacking midfield option, Arsenal may struggle to sign Odegaard with Zidane leaving Madrid, but Buendia could be signed for £30million, and he is more in the mould perhaps of a Premier League player. An aggressive ball progresser with end product is exactly what Arsenal need. With so much change in midfield Arsenal will need more than just Bissouma in central signings, Sander Berge and Manuel Locatelli are two players I think we should consider for these roles.

I think this gives our midfield good options and balance and I would probably keep hold of Willock given what he’s shown on loan and the homegrown situation.

See the forwards as central and wide left forward options. For this I think we need four options going into next season across the two positions.

With one year left and just turned 30, Lacazette is unlikely to earn a new deal at the club. Arsenal could cash in off the back of some decent form from the Frenchman this season. Another option may be to extend his deal for one-year, giving him two years left to run and allowing him to be sold next summer. Eddie has a place, but not at Arsenal. England under 21’s record scorer just doesn’t seem the right fit for the club and manager.

Arsenal are reportedly leading the race to sign Raheem Sterling this summer. Earning £300,000 per week at City currently, this would be a costly move for Arsenal, but given his form at City when Arteta was at the club, it’s an exciting prospect of that duo reuniting. I think Arsenal need to make a statement signing to take them back to the top four and Sterling could be it. He can play anywhere across the front three too, so would give Arteta options and tactical versatility. He’s also homegrown!

This would give Arsenal a real array of different attacking options and provide the club with multiple weapons from the start of games and off the bench in order to beat any team in the league. Martinelli and Balogun are young promising options, Pepe is improving and approaching his prime. Sterling and Aubameyang give you those more senior attacking presences to help in the big moments.

Arsenal’s lack of European football next season could be problematic in attracting personnel, but these signings are all unlikely to demand such a status immediately, but they’d still provide the squad with a huge uplift in quality. The likes of Buendia and Bissouma really improve us and it would be a step up for them. Sterling would be a huge coup but maybe his relationship with Arteta could convince him. Kounde appears the toughest and maybe most unrealistic on our list. If £80million is too much to ask from Stan, we can probably afford to sell Willock for £30million+ to bring that down a bit.

Chambers has just one year left and Arsenal have an option to extend that by another year, which I am sure they will do soon. Over the next 12 months Arsenal need to ensure the other four are signed up to new long term deals. Smith Rowe has just two years left and seems set to sign on, after a breakout in 2021. Saka, Tierney and Martinelli are all vital parts of Arsenal’s long term future and whilst their have three years left on their deals, Arsenal will want to have extended them all by this time next year. Arsenal have an option to extend Martinelli’s deal by a year, so they will likely trigger that. 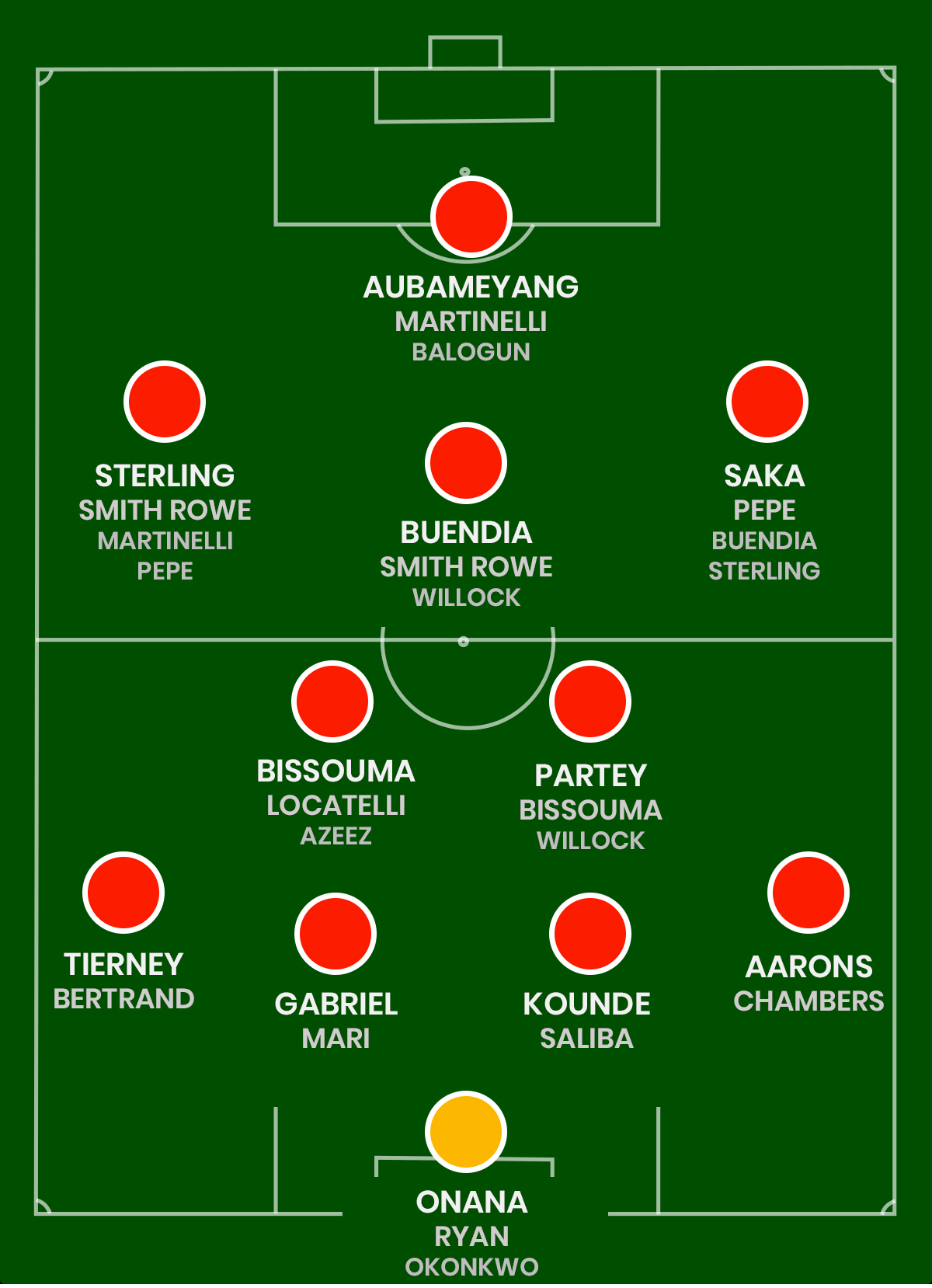 I know it’s too much to ask, but for me the moves I’ve outlined in this piece would really sort out the squad not only for the next season but for many years to come. Helping Arsenal build a squad capable of getting back into the Champions League and competing for trophies. If Arsenal can achieve 75% of this in the summer, I think it’s a great start.

Wenger Admits Regret Over One Of Arsenal’s Summer Transfers

Arsenal Loanee Hints At Permanent Exit From The Gunners After Midfield...

New Player Having A Photoshoot? The ‘Saga’ Answered