Last week Arsenal were heavily linked with Marouane Fellaini after The Times suggested the club were favourites to sign the Belgian ahead of Chelsea, Manchester United and other suitors. When I first heard of interest I took it with a pinch of salt and moved on. Then I remembered previous I had heard on Fellaini and Arsenal – the link began to make more sense. The more I thought about the move, the more appealing the thought of Fellaini in the Arsenal midfield made me excited. He’s so different that it would be perfect, and in this article I will try to put my feelings onto paper.

So first of all let’s deal with the ‘Fellaini doesn’t fit into Arsenal’ ‘He is not an Arsene signing’. I don’t mean to be rude but people who suggest that obviously know very little about Arsenal and Arsene Wenger’s philosophy. Stretching back into the Frenchman’s early years when he deployed a 442, a player in Fellaini’s mould was essential – Patrick Vieira. Then as the team moved into a 433 Abou Diaby was accepted by many as the heir to Patrick. When Abou was fit and he was played in that box-to-box role, Arsenal were transformed – that is Arsene’s Arsenal. Below is Diaby’s man of the match performance against Liverpool early in the 12/13 season –

After that performance we were all excited, but none as much as Arsene, he must have thought he’d finally found Vieira’s successor – all he needed was him to stay fit. He hasn’t and it’s time to move on. Wenger has waited 5 years for Diaby to be consistently fit and next season is one too many to wait. To come straight into the Arsenal team you need to be in the right mould. Fellaini fits the mould perfectly. 25, Premier League experienced, physical, clever and very intelligent. Back in November 2012 Arsene Wenger talked up the Belgian midfielder: “He uses his body well, but he is not a dirty player. He is an intelligent player.” He then smiled and replied “Yes” when asked if he felt the player could do a job for Arsenal.

What I like about these types of players is their versatility within a midfield. You can see it with Abou Diaby but my case study for this topic is Yaya Toure. Having a player of that ilk is like having an extra substitution at a manager’s disposal. Despite a lethargic look from the start, these players seem to be able to keep going for the full 90, as well as that they can alter their position and mentality in an instant. You saw Mancini often change Yaya’s role last season from box-to-box to holding midfielder or number 10 within a game. This is what Fellaini can do too, he played in the holding midfield role against Arsenal and impressed in the stalemate late last season. It’s interesting to hear that despite the goals that have come with Fellaini’s transition into an attacking midfielder, the player prefers a deeper role in the side.

“I prefer defensive midfielder because I know my job when I play there. More things are in front of you. It is difficult to play with your back to goal. It is not my position but the manager likes me there and I am happy to do it.” Fellaini told the Daily Mirror in December 2012.

Talking about his versatility the two games against Arsenal last season are the perfect example. In the first he played in an attacking midfield role and scored Everton’s goal in a 1-1 draw. In that game he really made it hard for Arteta to do his normal job in that deep lying playmaker slot. Fellaini used his robust nature to muscle-out the Spaniard and disturb Arsenal’s fluency. Stopping Arteta at the base of Arsenal is stopping their whole game before it can begin. Whilst David Moyes must gain some credit for doing this – Fellaini is an intelligent player and he knew the implications of his actions. Then take the second game at the Emirates. A game Arsenal needed to win, so Fellaini sat back in the holding role. This time it was Jack Wilshere and Santi Cazorla’s time to get frustrated. The Belgian aided with his long legs made it extremely difficult for the team to get through to the Everton defence. Despite playing a deep role I did notice Fellaini at times show off his box-to-box talents when carrying the ball forward to relieve pressure off his team – a special trait which makes him perfect for a box-to-box role. That’s where I’d see him playing for Arsenal; the ability to carry and hold onto the ball is something that is so important for a team in Arsenal’s formation.

This video shows everything Fellaini is about, it’s worth the 9 minutes of your life:

Fellaini adds a more dynamic approach to an attacking system. Whilst in the box-to-box role he injects that drive which immediately puts opponents on the back foot. The power in his physical frame alone would scare defenders. What I noticed towards the end of last season and when Abou Diaby was not in the side, Arsenal became predictable in attack. Suddenly we were working like a blunt pencil, not executing attacks properly and not with the same fluency and amount as we’d seen in previous games. I think this has a lot to do with the lack of a plan B – a secondary route to break down an opponent. The stature of Fellaini allows him to shield and turn players when static and explode past others when he chooses to change the pace. He doesn’t hide (it’d be pretty hard for him to hide). He loves to be on the ball and his off the ball work is what illustrates his intelligence within the game. As Arsene said, he’s not a dirty player – he knows how to use his weight effectively. What else will he add to the attack? Height. So many times Arsene has had to play / keep on Giroud so that we had his height to attack and defend set-pieces, adding someone of Fellaini’s stature adds a significant improvement to the team and allows more freedom and changes in attack without having to worry about the implications. Despite improving in this area this season – the saying that Arsenal get bullied in midfield would be well and truly put to bed. Fellaini also adds goals. He would play in Aaron Ramsey’s role, Ramsey has done well there but let’s face it he has not contributed to the goals, directly. Fellaini, as well as starting attacks and in-directly setting up goals – actually scores them. With 11 league goals and 5 assists in 31 Premier League games this season – albeit most from a more advanced position, Fellaini’s goal-threat cannot be doubted.

Fellaini would take Ramsey’s position in the side for now in my opinion. So how does he compare to the Welshman? Using the brilliant WhoScored.com I made some comparisons (all Premier League). Obviously Fellaini’s advanced position enabled him to gain better attacking statistics, but they are all still worth noting.

Because Fellaini scored some goals when he moved to attacking midfield, it seems very popular for people to say that’s his best position. I’d argue that’s not the case. Real Madrid have been admirers of the player for years when in a deeper role and they aren’t stupid. With a technical expert alongside in Mikel Arteta, paired with Fellaini you have a duo that would be incredibly hard to break down. If you look at them they have the potential to be the best central midfield pairing in the Premier League if they click.

Below is a heat map of Marouane Fellaini when he played in a deeper role against Arsenal in the 0-0 draw in April. Squakwa.com gave him Man of the Match in both games against Arsenal this season: 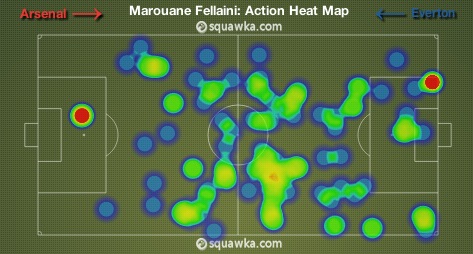 What are his weaknesses? With a pass success of around 10% less than most of our midfield that statistic sticks out like a sore thumb. This seems to be a concern amongst many fans as Arsenal’s slick fluid approach to the game requires top technical ability and safe consistent passes. But are the club being too safe? Would adding someone like Fellaini to the midfield be a good idea? Putting Fellaini in the midfield might damage the possession rates but it will add a new dimension to the midfield, a different mindset to the team, and, as I’ve said before – make Arsenal less predictable. Another thing I’ve noticed a lot of people talking about is his discipline ‘issues’. In his 5 years at Everton Fellaini has had one red card. Now I know he was banned after the game this season because of several incidents with a certain Ryan Shawcross. Even so, that equates to 2 red cards in 5 years (in all competitions) for a physical player playing in midfield. In the last three Premier League seasons he’s picked up 18 bookings in 85 games – nothing untoward. Being a physical player will see him pick up cards, but to say he has ‘discipline issues’ and to have only been actually sent off once in five years is just silly.

Analysis: Is Morgan Schneiderlin Really An Upgrade On Francis Coquelin?