2 weeks ago, this happened. A calamitous event with which Arsenal FC seemed to just crumble away. Travelling back from Swansea this image was probably shown time after time by the furious Frenchman in charge of these careless, spineless men. Saturday, it happened again. Dispossessed high up the field and an England international races clear of the Arsenal defence. Except this time there was no defence, it was just a small Spaniard, lost and clueless with his back to his own goal. 2-0. Down, defeated, finished. What is going wrong with Arsenal’s defence? 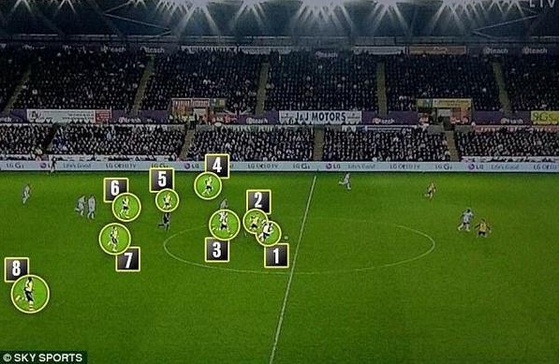 Let’s start from the front and work our way back. Ignoring Alexis Sanchez, the tenacious Chilean who busts a gut to get back in any situation, we start with the midfield. Aaron Ramsey, Jack Wilshere and Mathieu Flamini appear suspect in this picture. Flamini, playing as the midfield’s anchorman is not ‘anchoring’. Instead, the ship has sailed. The holding midfielder is sprinting back over the half-way line, a position he should never wonder in to, clueless. 1-0 up and away from home against a strong side signals that the team must defend, defend, defend and show a certain resilience in their tactical positioning. A lack of leadership from Per Mertesacker, one of the only players not in the picture, would be key here in order to pull Flamini into the space that is so dangerous when Gylfi Sigurdsson is playing: Just in front of the Arsenal back four. A split second of communication and Flamini does not go forward.

Introducing Jack Wilshere, England’s brand new deep-lying playmaker. His performances for England in the previous two international breaks have proved beneficial to the midfielder as he looks to have found his best position. Bringing this deep role to Arsenal would be huge for the Englishman’s so far stunted career. Caught too far up-field in search for an attack, Wilshere is clearly unable to use his initiative to sound out results. A smart, experienced midfielder would not have done the same. Alongside Wilshere is Aaron Ramsey. What is wrong with Aaron Ramsey? Quite a lot at the moment. Hungry for the goals and success he produced last season, he is culprit in this image of being caught way too attack-minded, obviously trying to get himself in a scoring position. Coming from deep and scoring goals was his rather long middle name last season, but an over-focus on it this season is proving damaging to Arsenal’s ability to win games and defend leads, as seen here.

Finally, Kieran Gibbs and Calum Chambers. I find it absolutely bemusing how two full-backs are either side of the half-way line…just. Both committing themselves forward, adding nothing but a proneness to counters, and then facing a long run back. Chambers, inexperienced at just 19, should have these instructions drilled into the front of his skull by now. Obviously a rarity by Arsene to initiate player-plans. Gibbs, a modern-day full-back who is bound to attack, should not have to commit this foul. He should be swarmed by yellow, ready to win the ball, release, and stay put.

Ongoing problems resulted in the same outcome last weekend. Chambers and Gibbs looked on to amend previous errors, Wilshere and Cazorla wanted goals and Mertesacker fancied a role as number 10. Problem after problem, week after week. You’d think this photo would indicate a change, but this is Arsene Wenger we’re talking about. The man inapt to change.

Transfers Curt Goff - August 17, 2022 0
Aston Villa are reportedly lining up a shock move for one of Arsenal's defenders as they aim to recover from a long-term injury suffered...

Transfers Curt Goff - August 16, 2022 0
Arsenal could be about to make a huge amount of progress in their summer transfer window in the form of a heavyweight departure. http://gty.im/1411844529 According to...

Transfers Curt Goff - August 15, 2022 0
Arsenal have announced the loan departure of a fourth first-team player, with goalkeeper Alex Runarsson joining Alanyaspor for the season. http://gty.im/1407344932 The 27-year-old joined the Gunners...

Arsenal Oli Price-Bates - August 15, 2022 0
Oli Price-Bates and Pet Berisha look back on an eventful Saturday afternoon at The Emirates, with Arsenal winning 4-2. Amongst the topics discussed are Gabriel...