At the time of writing Gonzalo Higuaín is closing in on a £22million move to Arsenal. I’ve had a lot of tweets asking me about Higuain, how I felt about the move, how I felt he would fit in etcetera. As I have with other players like Maraoune Fellaini and Lars Bender – I turned to a scout report to express my thoughts on a potential transfer. Let’s start with the stats – everyone loves a good stat. 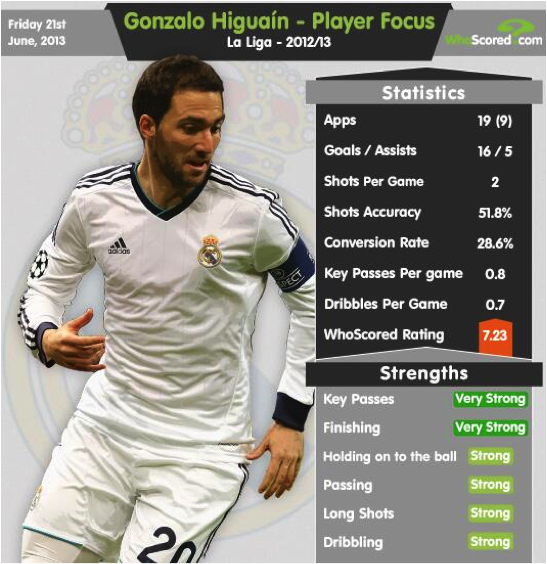 Higuaín’s goal per game statistics are warped by his huge amount of substitute appearances. In a stat tweeted by Squawka we see a good comparison with Giroud: ‘Gonzalo Higuaín scored a league goal on average every 107.5 minutes last season. Olivier Giroud scored every 211.6 minutes’. Despite his lack of game time Higuaín netted more league goals (16) than any Arsenal player last season, two ahead of the Gunners top scorer Theo Walcott. Giroud averages a 7.08 rating in the league according to WhoScored, compared to Higuain’s impressive 7.23. How will he fit into Arsenal’s passing game? Giroud averages one more pass per game. – but his pass success rate is only 63.8%, Higuain’s comes in at 76.6%. There is a concern that Higuain is ‘always offside’ by some… statistics show that he averages just one offside per game. In terms of defensive statistics Gonzalo makes less fouls and more tackles than Olivier. The current Arsenal striker’s strong point is his aerial presence, and that’s one stat where he tips the Argentine – Gonzalo Higuaín won 41% of his headed duels last term whereas Olivier Giroud was successful with 57% of the aerial battles. (See above) Every other shot Higuain takes is on target, and almost one in three go in. Higuaín’s consistency with his goals is what impresses me. He moved to Real Madrid at 19 with huge expectations and has since never failed to stop scoring, always bettering a 1 in 2 goal-scoring ratio.  I read that in the last five years, only Lionel Messi and Cristiano Ronaldo have scored more La Liga goals. 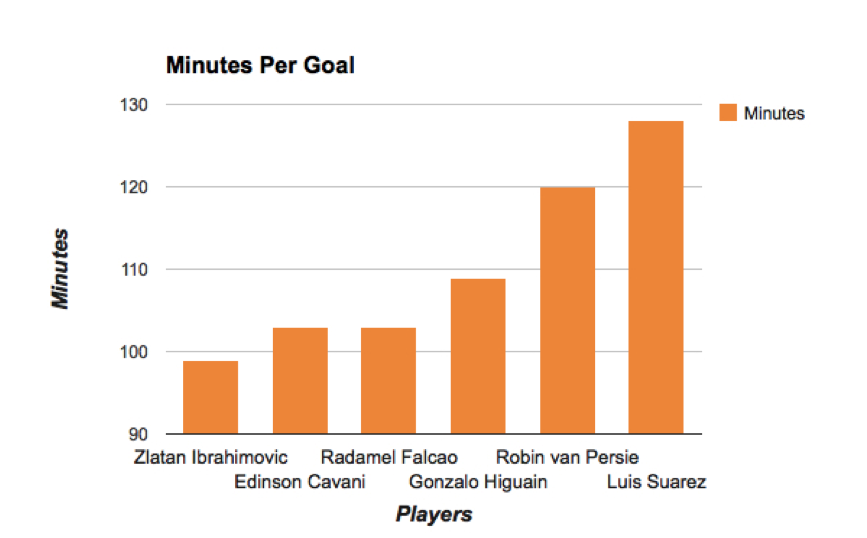 (Graph via bleacherreport.com) – Gonzalo Higuaín has a better – goals per minute ratio than Robin van Persie and Luis Suarez (see above). That guaranteed consistent and experienced record of scoring goals is exactly what Arsenal need. Higuaín ranks amongst the best strikers in the world in pretty much every department – and that’s because he is one of the best.

I’ve heard a few people moaning about Higuaín. Lots of people have been suggesting he is immobile and doesn’t contribute to the build-up play. That’s complete fiction. Higuain likes to play on the shoulder but after watching him for 90 minutes on many occasions Gonzalo also loves to link up. His movement in and around the area is second to none. Now he’s not the best player in the world, and I’m sure he’d need a bit of time to adapt to the Premier League, but in terms of whom Arsenal could buy, I can’t think of anyone more suitable (who is available). I’d describe Higuaín as a ‘complete forward’. He’s not a player who relies on pace or power, but instead he has a bit of everything – this can be an advantage or disadvantage depending on the opponent. But being a good all-rounder is likely to help when the player attempts to adapt to a new league. He doesn’t have many stand-out weaknesses that opponents can play too, and neither does he have specific strengths (apart from being a goalscorer).  He’s an interesting player and I wouldn’t say there are many other players like him at the moment.

To get a more in-depth idea of the players’ style I spoke to a Real Madrid fan @ChurchOfFutbol who told me the following:

‘Higuaín is a lone striker that helps his team-mates more than he helps himself. Contrary to Benzema who makes runs just to have a strike at goal. Higuaín moves around the field, passing and shooting. Against United he assisted the winning goal. He strays offside at times, but he’s a very young player. In Champions League games he handles pressure very well despite being young. With the right teammates around him, he could drift around and find the space he needs to score and assist goals. Higuaín is the king of La Liga, he scores many times despite the little amount of minutes he played.’

This video excellently shows his movement and contribution to the team. Every touch from the game against Levante during which he scored a magnificent volley:

Below is a heat map of Gonzalo Higuaín against Real Soceided in a 3-3 draw. 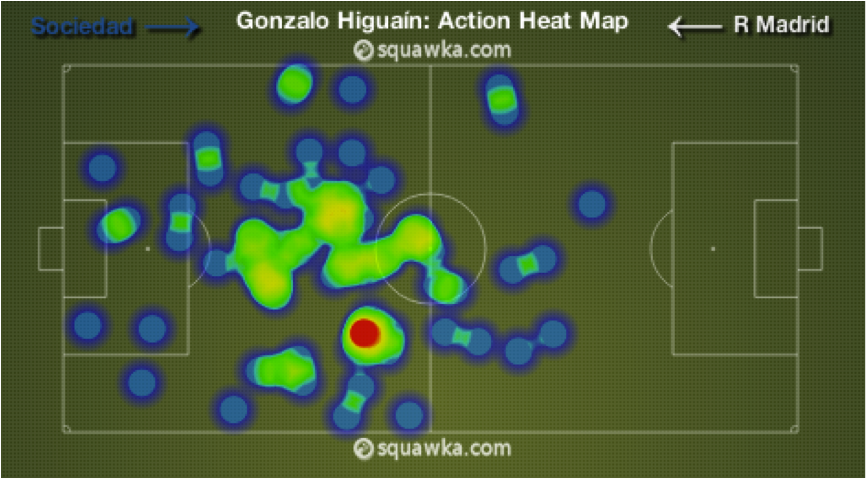 Below is a heat map of Olivier Giroud against Swansea in a 2-0 win for Arsenal. 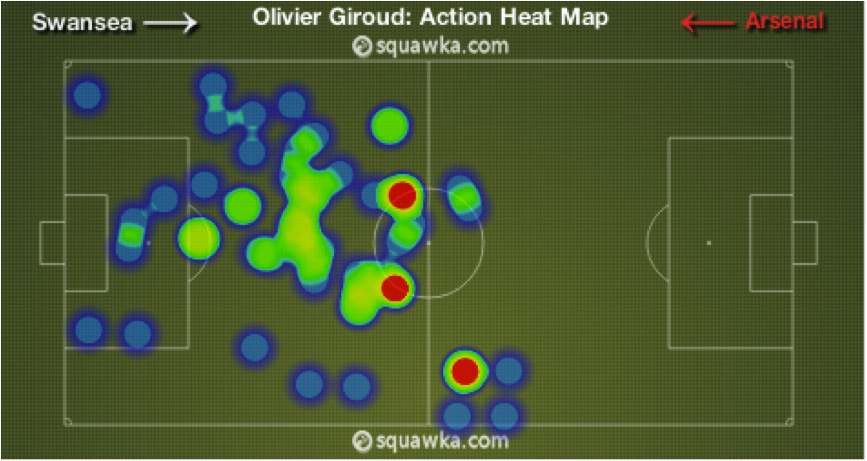 The heat maps show similar patterns in the strikers approach to play. Both Higuain and Giroud seem to be willing to drop deep at times to link up play with others. With Higuaín having a better pass success rate and averaging a similar number of passes per game – there should be no problems at all with Higuaín slotting into Arsenal’s link up system. Without any concrete statistics to back it up, I’d suggest Higuain covers more ground than Giroud during a game. He also seems to be alert and keen to be involved in the game. If the other players are on his wavelength then there is the potential for something great to happen.

Where would he fit in? Well obviously, bar a change in formation Higuain would come straight in and play as the lone striker. What I find interesting is Santi Cazorla’s conversion to the wing – this is something that will only help Higuain score goals. Cazorla and the number 10 (Wilshere) and their creativity between the lines to thread through eye of the needle passes is the perfect midfield set-up for a player like Higuain. Add a pacey winger like Theo Walcott on the right and you add another thorn into an opponent. Similar to when we had Robin van Persie and the partnership he developed with Walcott – I’d expect something similar. Higuain would displace Giroud as the main striker at Arsenal, but with Giroud’s unique playing style the Frenchman would still have plenty to contribute to the Arsenal squad. I am confident that signing Higuain would bring out the best of both strikers – both confident in their own ability. The signing would almost certainly spell the end of Gervinho as a striker. Gervinho again brings something unique when playing in that position, but it’s something that most of the time is frustrating, and not to the opposition.

It’s a World Cup year for Higuaín, and he will be keen to play week in week out with the likes of Sergio Aguero, Lionel Messi and Carlos Tevez to contend with for a spot in the national team. In the six years he has spent in Madrid, Higuaín has never been the regular superstar and focal point of the team. Moving to Arsenal would change that. At 25, the next 5 years will probably be the best of his career, and despite what others say I’d rate the player in the £30million bracket. I think if it wasn’t for Higuain’s declaration that he wanted to leave then that would have been his price. As long as it’s not over £30million, Arsenal should really do everything to sign Higuain. Not often does a player of this calibre become available, and even more rarely are they prepared to swap Madrid for Arsenal. This signing would make others take notice and open the door for other big names to join the club. It would convince the current crop that the club are ambitious and hopefully stick a cork in the flow of talent that seems to drip out of the club year after year. In five years we could look back and remember this summer and this signing as THE one that changed Arsenal dramatically. Let’s not Dick around.

Thanks for reading my latest scouting instalment on www.fresharsenal.com – you can follow me at @OliPriceBates – Please contact me on who you’d like me to scout next and with any feedback you have on my already published articles.  I’ll leave you with a video of his goals and assists this season, enjoy.

Mesut Ozil: “There Is No Rush To Sign New Contract”

Revealed: The Most Common Crimes Committed By Footballers