Moving up the table, before the Tottenham game on Saturday, Arsenal had only lost 1 of their last 11 games. Things were looking positive for the Gooners, as players like Mesut Ozil and Aaron Ramsey returned from injury and the defence had kept three league clean sheets in a row under the guard of new first team goalkeeper, David Ospina. It was not luck that lost the Tottenham game for Arsenal as they never really forced their way into the game and threatened their rivals in the final third. Fans can complain about the performance of the referee as he failed to book Ryan Mason, despite multiple fouls, and missed Danny Rose’s potential leg-breaking tackle on Olivier Giroud. However, Arsenal never looked too threatening or intimidating, despite it being the North London Derby. 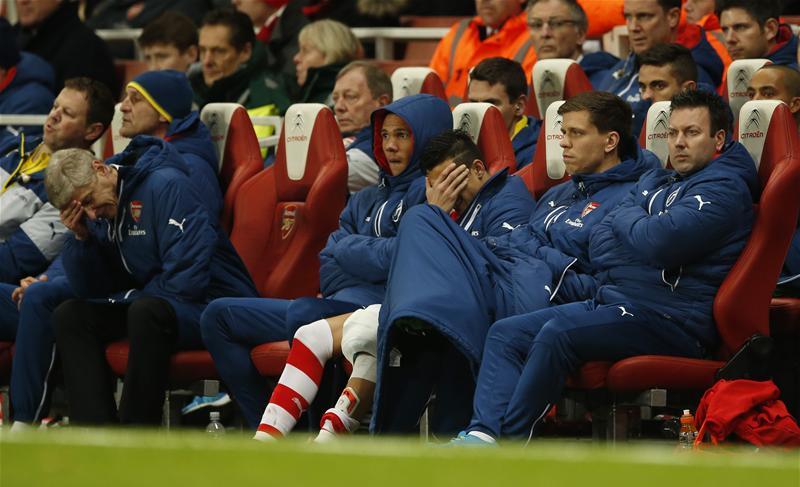 The aim for the Leicester game was to bounce back from this defeat, playing at home to the team that are bottom of the league table. After a quick start to the game, Arsenal led by 2 goals but then seemed to tire out and relaxed the attack on their opponents. Leicester were close to getting back into the game, as Andrej Kramaric scored and he had another great chance to equalise, which was comfortably saved by Ospina. The tiredness was understandable as it was a midweek fixture, but it is unacceptable for a team of top calibre, as Arsenal have an important midweek fixture in the Champions League coming up this month against Monaco. In addition to this, substitute, Aaron Ramsey, suffered from another hamstring injury which has led to another four weeks on the sidelines. Alexis Sanchez picked up a knock but returned for the FA Cup tie this weekend against Middlesbrough, despite being quieter than his usual self which could be due to the injury.

These injuries show how Arsenal are unable to catch a break as they have become a team who regularly suffer from injuries every season. It is rumoured that it is due to manager, Arsene Wenger, and his out-dated training methods. However, his players never suffered from such a high number of injuries when they were winning league titles. The introduction of German fitness coach, Shad Forsythe, in the summer has obviously not had any improvement on reducing the number of injuries at the club, so a new approach needs to be taken. People are calling for Wenger to be sacked and replaced by Borussia Dortmund manager, Jurgen Klopp, despite him suffering from a similar number of injuries in the past couple seasons. This shows that Arsenal are not the only club to suffer from a ridiculous number of injuries which can ruin campaigns. This is shown in the Bundesliga, as usual title challengers, Dortmund, have been underachieving this season, flirting with the relegation zone throughout. Former Wales assistant coach, Raymond Verheijen, has called for Welsh international, Ramsey, to leave Arsenal if training methods are not changed. He believes that Arsenal are “amateurs” in their training methods and are the cause behind their own injuries.

What do you think is the problem behind Arsenal’s injuries woes? Comment below

Where Does Jack Wilshere Fit In To Arsene Wenger’s Current Plans?

Why Kieran Tierney would be an important signing for Arsenal