Arsenal fans have been handed a positive boost in their pursuit of a second summer signing, following Alexandre Lacazette’s recent Twitter activity.

The 24-year-old caused the media to spark with transfer speculation, after the striker favourited a tweet involving the Gunners.

And although that might not seem too impressive, it is the first time he has done that since joining the social media site back in 2012.

The tweet was originally written by Arsenal fan and blogger, Dean Winchester, who had copied in a link for a story that spoke of Lacazette making an imminent move to Arsene Wenger’s side. 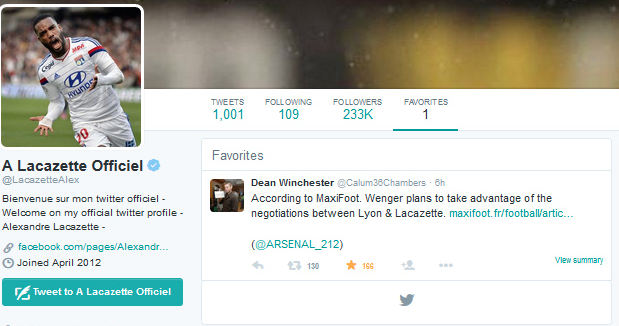 Reports have linked Lacazette with a move to Arsenal in the last few months, and this news has simply increased the suggestions he could be heading out of the exit door at Lyon.

The French international recently capped off a stunning season in Ligue 1 after securing the Golden Boot trophy for the 2014/15 campaign.

And it’s exactly that type of form which has sparked Wenger making an approach, despite the forward having a contract which lasts until 2018.

That news could well increase his value as Lyon look to cash-in on their prized asset, who has reassured that Champions League football is his sole priority.

Speaking recently in an interview, Lacazette ensured that his future was still being decided, and will be resolved shortly once he returns from a holiday break.

I have not made my decision. I will go on holiday, leave my agent to discuss things, for him to look after all that.

I am not worried. As soon as I have decided, I want it all to happen quickly. Everything depends on the destination. It would have to be for a Champions League club.

At 24 years old and a recent goal tally of 27 in Ligue 1 last year, the forward could well be the missing piece of the puzzle for this Arsenal squad, who are now preparing to mount a serious title charge with main rivals, Chelsea.

And although things are looking bright to bring Lacazette to the Emirates this summer, Liverpool are threatening to put a damper on their attempts.

Brendan Rodgers’ side are currently rebuilding their squad having already made a handful of signings in the transfer window, and the imminent departure of Raheem Sterling will hand them nearly £50million to splash on new talent.

That would be plenty to secure the services of Lacazette, who could be available for a modest £25million, whilst demanding a six figure weekly wage.

According to reports in France, Arsene Wenger has already sent scouts out to watch the Lyon star, but any advance for the player will come after the clubs tour of Singapore, which starts on Wednesday.

Did You See: First Pictures Of Petr Cech Training With Arsenal