Arsenal are readying a €12million bid for Barcelona defensive midfielder Sergi Samper according to reports in Spain.

Mathieu Flamini is set to join Galatasaray in a £2.8million deal – and Samper, 20 could take his place in the squad.

Wenger has previously tried to sign Samper and has been interested in him since he was just 15. The Gunners failed then, but he could now be available.

Wenger’s been eyeing Samper since he was 15 years old. His attention is justified. Best midfielder from La Masia since Thiago.

Samper is rated highly by fans and staff at the club, but the player is growing frustrated at the lack of first team opportunities. Arsenal’s current defensive midfield options mean that Samper could realistically play a fair bit of first team football this season at The Emirates.

We could of course go and sign a big name midfielder, but we do have plenty of big name midfielders. If we sign Samper to replace Flamini, we’d then have Coquelin, Arteta (leaving at the end of the season) and Samper as options in the defensive midfield role. That looks good to me.

Below you can see the front page of Wednesday’s El Mundo Deportivo in Spain. It suggests Wenger is readying a €12million bid for Samper. 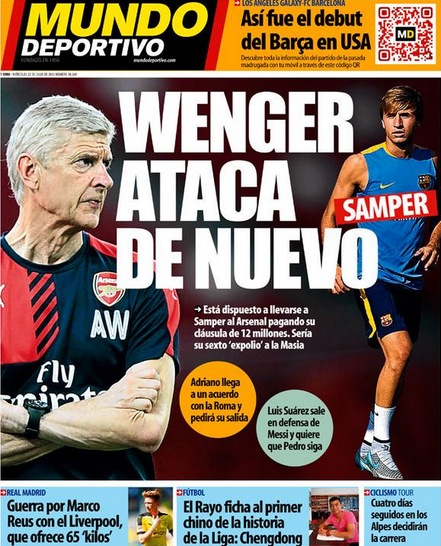 Whilst I am a big fan of Coquelin’s presence, once we lose Arteta at the end of the season we will miss a possession master in the middle of the park. Samper has the potential to be world class and would be a very good signing from Barcelona B.

With Coquelin’s performances at the end of last season it would be hard to justify dropping him for a new signing. Samper would be content at trying to earn his place and the competition would surely get the best out of Le Coq.

Samper played with Hector Bellerin and Jon Toral at the La Masia academy, Wenger may finally get his chance to poach all three from Barcelona.

Samper has been at the Spanish club since the age of 6 and if he did leave it would be seen as a big loss for the club.

Is Samper the right replacement for Flamini, or should we sign a more proven midfielder? Comment below with your thoughts.

Player of the Week: Petr Cech

Wenger Says New Signing Is More Than A Player, ‘He’s Like...

These 5 First Team Arsenal Players Are Set To Leave Next...