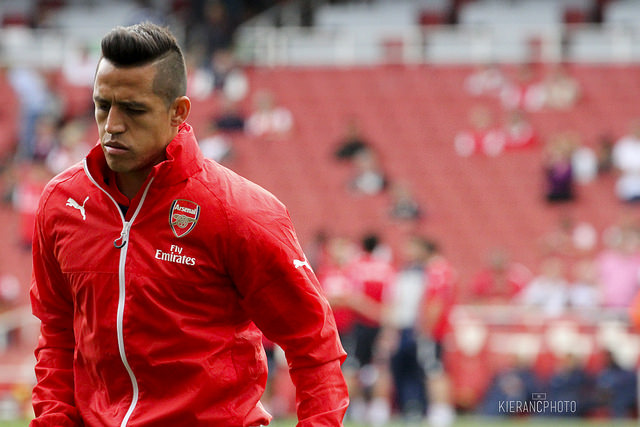 Arsenal face an important decision this summer over the future of Alexis Sanchez, with the Chilean yet to confirm whether he will be with the club for the long term. The 28-year-old has been a revelation in his three years at the Emirates Stadium, but as he enters the final year of his contract, other teams have been circling in an attempt to lure the forward away from the Gunners.

Sanchez has reportedly become disillusioned with his side’s lack of success in the Premier League and the Champions League, despite winning the FA Cup by defeating Chelsea in the final. Manchester City, along with Antonio Conte’s men, have been linked, although the strongest suitor for his signature is Bayern Munich – given the potential for the Chile forward to play alongside his international teammate Arturo Vidal at the Allianz Arena.

The Gunners could raise significant funds by allowing their star asset to leave, with the alternative seeing him depart for nothing at the end of his contract. Arsenal could put the cash to good use, as tentative reports suggest that they could attempt to sign teenage sensation Kylian Mbappe. Previous targets Pierre-Emerick Aubameyang and Alexandre Lacazette have already secured moves elsewhere, leaving options limited in direct replacements for the Chilean should he move on.

Wenger would be a making a bold statement by challenging Real Madrid for the Monaco striker’s signature along with his team-mate Thomas Lemar.

However, it could be the move that swings the balance of power in the Premier League towards the Gunners, which would make them an enticing punt to end their title drought; they stand at odds of 10/1 to claim the crown, with free bets available via comparison site Oddschecker for those who don’t have enough confidence to lay down their own money.

Sanchez has provided the source of quality inspiration in the final third that has been missing from the Arsenal frontline since the departure of Thierry Henry in 2007, surpassing even the contributions of Cesc Fabregas and Robin van Persie. However, a new injection of young talent could provide the spark to end Arsenal’s inability to get over the line.

Signing both Mbappe and Lemar would allow Wenger’s men to compete at the top of the table not just for the next couple of seasons, but beyond and would perhaps allow the club to attract further world-class players around them.

It’s a huge decision for the Gunners and there’s no guarantee they would be able to secure the deal, but given their current situation where they’ve been stuck in purgatory for the past five seasons it could be worth the gamble.

Euro 2016: How Arsenal’s Players Have Performed In Round Two