Sick of waiting all season to switch out your expensive fantasy football stars? Bored of lagging behind your mates for the entire season? Listen up as your fantasy footy experience is about to be transformed. 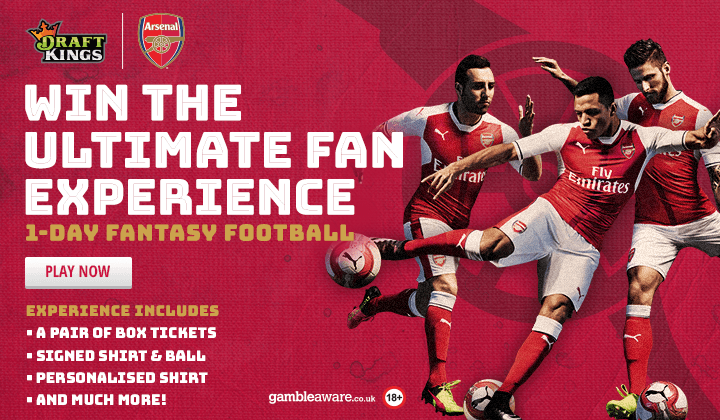 Daily fantasy football from DraftKings offers football fans the opportunity to win big prizes on every weekend of the Premier League season and do so whilst picking a brand-new line-up on each matchday. No more getting lumbered with Olivier Giroud during his long goalless streaks. Switch in Alexis Sanchez and watch the points roll in.

Picking a line-up is simple. You get a $50,000 budget to choose eight players: one goalkeeper, two defenders, two midfielders, two forwards and one utility player (any outfield position). When it comes to winning the big money, you’ll need to have your Statto head on to be in with a chance of triumphing in the contests offering the very biggest prize funds.

Players score points across a range of categories. All the usual categories like goals (+10pts), assists (+6pts) and shots (+2pts if on target, +1pt if not) are here but your players also score points for interceptions (+0.5pts), successful tackles (+1pt), crosses (+0.75pts) and even fouls drawn (+1pt). Francis Coquelin never seemed so valuable!

After you’ve selected a line-up enter one of the hundreds of contests available. Public contests are the biggest ones around and offer thousands of pounds worth of prizes each weekend. Private contests, meanwhile, are where you can take on your mates and gain bragging rights on every weekend of the season.

When you’ve picked a team and entered a contest, it’s time to sit back and wait for the lineups to be released. When this happens, line-up indicators will denote who is playing and who isn’t, at which point be prepared to adjust your line-up accordingly.

Then you’re done. Head down the pub before the Gunners kick off and watch the points rise in real-time as the goals fly in, tackles are won and saves are made.

3 Things Arsenal Have To Do For This Weekend’s Leicester City...

Wenger To Make 10 Changes: How Arsenal Should Line Up vs....

Opinion: Arteta has proved the doubters wrong and got these major...