Since his arrival I’ve been a big fan of Olivier Giroud. When he joined the club it was obvious he had the quality and right attributes to be a very valuable player for our club. Despite this he struggled to convince many – but media and fans quickly forgot it was his first season in a new league, the best league in the world. It’s not easy to come into a new team and league and perform to your best immediately, especially when every step and shot he took was immediately compared to Robin van Persie.  He’s now adapted to not only the demanding nature of the Premier League but also to Arsenal Football Club and it’s expansive approach to football.

As much as he’s evolved his game – the others players have learnt and developed their understanding with him and clearly now have a better on field relationship with the player. This season we are seeing hard work pay off, he knows where Walcott likes to put the ball, Walcott knows where Giroud will be and the rest of the midfield see Giroud as a safety blanket to give the ball too, as his hold up play has really developed. Take the Tottenham game for example. Every time we cleared the ball to safety, Giroud wrestled his way into a position to receive and then keep the ball. The strength he showed on numerous occasions to burst past and hold off Tottenham players was brilliant. As much as Giroud has obviously worked on and improved numerous aspects of his game, the team are finally starting to understand Giroud. See the GIF below which says it all:

Finishing is the one area of his game that has improved the most so far this season. In his debut season he’d often find the positions well but fail to capitalise. This season we’ve seen him finish with instinctive touches and flicks; he seems to angle the ball perfectly into the corner from any position. With a total of 11 league goals last season, Giroud will surely improve on this respectable tally with a more prolific total this season – he has already netted 4 in the league. An interesting note is his heading seems to have actually improved at Arsenal, as least the amount he has scored with his head has already far exceeded the figure he managed at Montpellier.

Olivier brings a unique quality from a striker, the ability to come back and defend from a corner – something Arsene likes in a forward – he made Robin van Persie perform a similar role during his time at the club. This physicality and stature has helped Arsenal deal with set pieces and reduce the number of those they concede from. He has already helped prevent goals on several occasions and if he doesn’t play I am always more worried when the opposition has a corner, I’m sure Arsene feels the same.

I have talked a lot about Giroud’s improvement, but his first season was actually very good and the fact he missed some clear cut chances masked much of his good work. It’s a myth that Giroud ‘flopped’ in his season and that he is an average striker. He was mis-understood and adapting to life in a new area, club and league. Below is an info-graphic of his first season in the Premier League: 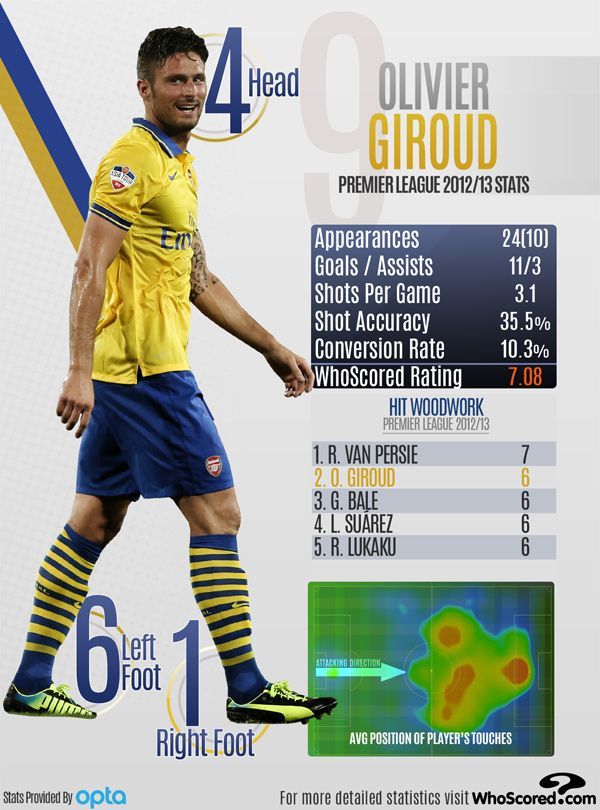 There is still room for improvement from Giroud, no question. With a pass success of just 61% the Frenchman needs to boost this figure – but it is somewhat distorted by the fact he wins so many headers that don’t always meet an Arsenal player. His link up play has improved this season and his better and his pass accuracy is likely to improve with a player of Mesut Ozil’s style pushing up along side him. He also needs to continue this form, show a consistency in his quality. He should be targeting 20 league goals and the Golden Boot, there is no reason why he can’t do that this season. A midfield Arsenal made up of the likes of Ramsey, Wilshere, Cazorla, Walcott, Rosicky, Ozil and Podolski providing – he’s the only senior centre-forward Arsenal have right now. He finds himself in a fortunate position, but one must not under-estimate his ability amidst all the praise for the midfield maestros.

The likes of Aaron Ramsey and Olivier Giroud were criticised heavily by fans last season, but these two are examples of why fans must be more patient with players and trust Arsene Wenger’s judgement – he sees and trains with the players every day. Six games into our season I write this article happy with how the club have started the season, let’s hope that Giroud stays fit and keeps working on his game to continue this brilliant form.

Can Arsene Wenger Win The Champions League For Arsenal?