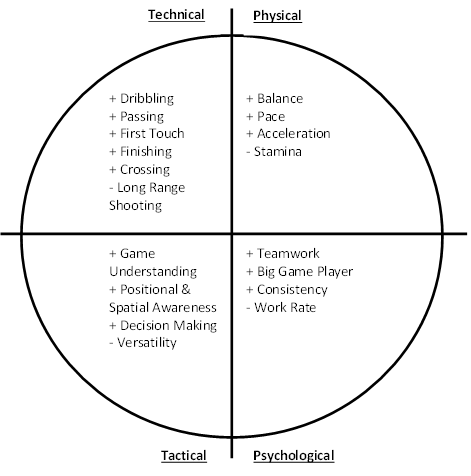 Özil’s technical ability is regarded as one of, if not the cleanest and most precise in world football. Capable of drifting past players with ease and playing accurate through balls in the final third makes him extremely potent when given time to receive and turn. Özil has an extremely tight control when in possession and defenders continuously find it difficult to engage him due to his ability to change direction and move himself away from danger.

An understated aspect of Özil’s makeup is his finishing ability. Despite not being a prolific scorer, many of Özil’s goals have come through unorthodox methods of finishing, often giving the keeper the eyes and finishing near post or shaping up to finishing far post and ending up delicately chipping it over the fallen goalkeeper.

Özil’s has a fantastic appreciation for the weight of a pass, on top of his obsession for accuracy. He has similar traits of many that come through the Spanish academies when it comes to “pass language”. When a pass has a slower speed on it, it gives the indication that the passing players has time to turn, however is a pass is hit with more power than it gives the indication that the receiving player should look to pass first time back or in another direction. Özil also has the ability to play much more creative and innovative passes, such as his pass to Khedira where he intentionally hit the ball into the ground to allow it to bounce over an opposition tackle, and into the path of his German teammate.

Özil is deceptively quick, he shows that frequently when in wide positions when he drifts past the defending player and glides away at pace. He isn’t a powerful runner, he is someone whose pace becomes more relevant after his has bypassed the defender, rather than on his approach towards him. The biggest element to the physical makeup of Özil is his balance; he is exceptionally good at feinting in both directions and can move defenders with ease without having to touch the ball. He isn’t a player that gets pushed off the ball easily, despite his larger frame than many playmakers of his type, he still possesses a tight control of his body and is able to wander between tackles whilst being in an upright position. Despite this, it could be argued that Özil isn’t the fittest of players, he is muscular but he doesn’t often impose himself on the game for 90 minutes and does need resting periods in games, this could also be more down to his own tentative approach to defending.

This is arguably the greatest element to Özil’s game, his intelligence and movement off the ball. He often drifts in and out of the central area, moving into the wide areas and making himself free of a marker. Özil’s movement is often lateral than it is vertical; this defines the way that he looks to play. He’s a provider rather than a goal scorer. He is a remarkably intelligent footballer who can adapt to various situations and is someone who likes to surround himself in space as much as possible, if Xavi is the ideology of Barcelona and Spain keeping possession, than Özil is the ideology of moving between the lines and receiving in space.

Özil is one of the most consistent playmakers around, many players who play in the attacking midfield position can often drift in and out of form due to many reasons, be it physical or tactical, but Özil tends to give 7 or 8/10 performances on a consistent basis. He is a player who often performs well in big games, the term “big game” can be defined in many ways, a big game can be a derby against Atletico Madrid, or a Clasico against Barcelona or a big Champions League Game. In any case, Özil is a player who performs in big games, and is the centre of big moments. A downside to Özil’s psychological makeup is his lack of defensive work ethic. He isn’t lazy or unfit, but has a tendency to defy defensive instruction in order to stay free of a marker and conserve energy for when he receives possession again.

Özil’s debut season for Real Madrid was a massive success. Jose Mourinho managed to purchase him despite interest from Manchester United among other elite clubs and was deployed as the primary attacking midfielder in Mourinho’s quest to dethrone Barcelona from the pinnacle of world football. In this season, Özil scored 6 and assisted 17 in the league, remarkably providing 119 chances to team mates in 30 games (+ 6 substitute appearances). Despite playing high up the field in congested areas, Özil managed to have an average of 85% pass accuracy which underlines his substantial technique and overall contribution to a team’s attacking efficiency in the final third.

Once again, Özil was consistently one of the most dangerous players in the league, this time scoring 4 and again providing 17 assists. He managed to create 103 scoring opportunities, a small decrease on his previous seasons tally. This season, he was sometimes deployed in a wide right position in order to accommodate Real Madrid’s other attacking midfielders such as Kaka and Angel Di Maria, but he still managed to positively influence Real Madrid’s attack and averaging an 87% pass accuracy.

Despite a turbulent season for the club, Özil managed to score 9 and assist 13 times in the league, and provided 92 key passes over the course of the league season. Squawka’s pitch view shows Özil’s tendency to score inside the box, rather than look for more spectacular finishes from outside the box. Again, using Squawka’s infographic it is possible to see what areas of the pitch Özil likes to operate in, and where he tends to create chances of his team. As can be seen, a large majority of them come from the central areas, and the second largest comes from when he drifts over to the left hand side.

How Will He Fit Into Arsenal:

Özil is made for the Arsenal system, or rather; the Arsenal system is made for Özil. Arsenal have the players that will not only benefit from Özil’s abilities, playing tendencies and style but will also be beneficial to Özil himself. Santi Cazorla will be one of those players who will not only benefit from Özil but will be of benefit to him, his own technical abilities and tendency to drift from left to right will fit perfectly with Özil’s movement from centre to the left, therefore taking full advantage of the space. Theo Walcott is another player who will benefit massively from Özil’s presence. On many occasions, Walcott has made intelligent runs from right to left, in between the opposition fullback and centre back but the quality of the pass into the space has never been consistently accurate enough, now Arsenal have a player who is more than capable of providing those passes.

Not only will Arsenal improve when in possession of the ball, but their counter attacking game will improve drastically too. Özil can be described as a “transition player”, someone who excels when the game is going from a defensive to an attacking transition, when players aren’t in their correct positions and congestion of players is moving and space is constantly opening before closing. Due to his pace, balance, and technique, Özil is the perfect counter attacking player for Arsenal to have when they are defending deep in their two banks of four.

Thanks to Whoscored.com and Squawka for their data and images.
Photo via Sama093 – http://www.flickr.com/photos/sama093/

Deal Agreed: Midfielder To Have Medical Within 48 Hours