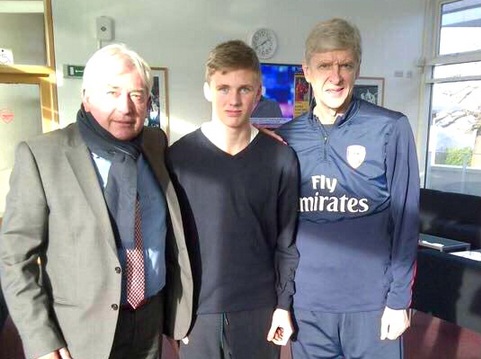 The Gunners have been tracking Graciar (above, central) for some time, but have today agreed a deal to sign the young striker for an undisclosed fee. He will officially join the club when he turns 16, but a deal has been reached between the two clubs.

Graciar is due to undergo a medical with the club next week and will spend two weeks in London. During this time he will play, on the 24th of January against Southampton and the 31st of January against West Ham for the under 18’s. Graciar has also suggested he will have a chance to train with the first team during this two week period.

The player has reportedly attracted interest from Chelsea and Real Madrid so he obviously has the raw quality and the potential to be a very good player.

Even though Wenger is unlikely to be at the helm when Graciar makes it to the Arsenal first team, the youngster confirmed it was the Frenchman who convinced him to opt for the Gunners. Graciar wrote on his Facebook page: ‘Wenger is the one who made this possible.’

Another kid signed, when will Wenger convince a senior defender and defensive midfielder to join? We live in hope.