Quarter finals! We will not let this up, and I think FA Cup will rapidly become first priority in the coming weeks, even amidst Champions League and fourth spot security. We want Wembley again, and the competition that stands in the way is more than beatable; I’d say we’re the favourites now – as we were one year ago. We’re in better shape, with better players and better attitude. There’s a lot left in this Arsenal campaign to cheer for. The next ten weeks will be a roller coaster ride. Player of the Week is that superstar again – no, not Alexis, or Santi, the other one – god, there’s too many how will we ever cope. It’s the wonderful Mesut Ozil of course.

Our German wonder has done it again. May all who doubted him be cast back to the shadows. It’s so brilliant to him playing with a smile, and with a dash of grit, too. Now that he’s Premier League built after a rocky first year, it’s paying off. His successive man of the match performances are as clear an indication as any. Whether it’s down to something as simple as needing one season of adjustment or something deeper in the form of the arrival of Alexis and return of Theo we can’t know, but I reckon it’s both. He looks determined to prove the ‘haters’ wrong – something he frequently advertises on Twitter, which also show’s he’s one of of our more, if not biggest, player regularly active on social media. It’s unclear as to whether this is good or a bad thing at the moment, but for now it’s nice to see some passion and reflection after games, he’s even looked to a bit of light taunting before games – even though I hate jinxes, an in the case of the NLD that’s exactly what it turned out to be. I’ll forgive him though; he’s playing superb. He can do whatever he wants as long as he ignites the grass. He started the week off in super fashion; assisting and netting against Leicester and providing the spark in what turned out to be an uncomfortable night. He shone through though with his superiority. The same superiority was carried through to the FA Cup where he truly controlled the game, and simply toyed with the opposition – the gulf in class was enormous and saw Arsenal put in one their best performances of the season. We were ruthless, and a large part of it was due to the partnership of Ozil and Cazorla, who danced around and split the defence open time and time again. We should have had more. Ozil should have been rewarded a goal for his efforts, but take nothing away from his immaculate contribution all over the pitch. With Mezut, it’s the little things that stand out with him; the small touches and dribbles around the pitch, the deft passes, the one-two’s. He’s World Class because of his intelligence and precision with the simple areas of the game – something most players are still yet to master. And he wasn’t alone. 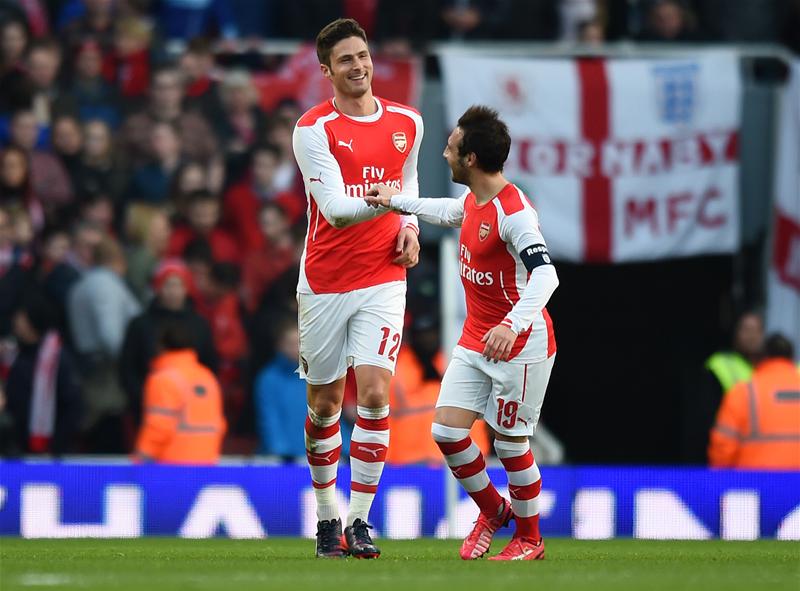 Our super Spaniard continues to seize every game he plays in. He captained the team on Sunday, a reward from Wenger for his outstanding season; and he doesn’t show any signs of letting up. He is dominant, and together with Ozil interchanging in the pockets of space it’s difficult to foresee a game where we’re not racking up the chances. Santi relishes playing in the middle, advanced or deep, which is a fantastic option for us considering the pace we have out wide. With Sant sitting deeper, we no longer have to shift him or Mezut out to the wings. Mezut can play ahead of Santi, as long as we ave a solid defensive midfielder playing alongside them both. It’s clear Cazorla has no problems with tracking back in midfield and putting a shift in. If this is how we’re going to keep Mezut in the team then I’d prefer him in the middle like this with Santi, and play our speed merchants on the flanks – to provide constant outlets and danger.

Did you see? Man Of The Match, Again! Mesut Ozil’s Stunning Stats vs. Middlesbrough

It was also a promising debut from Gabriel who should reinforce the steel at the back. And people should stop comparing him to our top model Giroud, because we brought Gabriel in to kick people, not to pose for them. A very solid return to the team from Kieran Gibbs as well. He was a super outlet all game. Great assist, he couldn’t have played any better – I’m a big fan.