Arsenal appear to be making their move for a new central midfielder this summer.

The Gunners have been linked to a wide range of midfielders this summer and amongst those are Anderlecht midfielder Albert Sambi Lokonga.

According to the reliable David Ornstein of The Athletic, Arsenal have had a bid of around £13million, including bonuses, rejected by Anderlecht for Lokonga.

Arsenal will be confident on sealing a deal though if they raise their offer slightly. Anderlecht are reportedly looking for £17.2million and most likely, with a better structured deal that would see more of the money arrive upfront.

Arsenal will be in the market for more than one central midfielder this summer. Dani Ceballos has returned to Real Madrid and Granit Xhaka is set to leave the club this summer.

Matteo Guendouzi and Lucas Torreira have also been made available for transfer this summer, as per ESPN.

With such a marginal difference between Arsenal’s rejected offer and the price requested by Anderlecht, you would expect this deal to be concluded.

Lokonga is captain of Anderlecht at just 21 years old and according to WhoScored, has very strong passing qualities, as well as dribbling and interception skills. They list him as having ‘no significant weaknesses’ – sounds nice.

Have a look below at Lokonga in action. 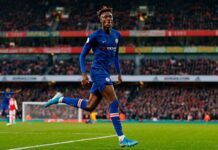 Arsenal forward Reiss Nelson appears to have hinted at a move away from Arsenal, with several Premier League clubs said to be interested in...

Wenger Reveals Arsenal Forward Has Serious But ‘Not Life-Threatening’ Injury