Arsenal have been dealt a blow for more reasons than one after one of their forward players announced he was injured.

On Thursday afternoon, Gunners forward Reiss Nelson posted to his Instagram story to announce he had suffered an injury and would be ‘back soon’. 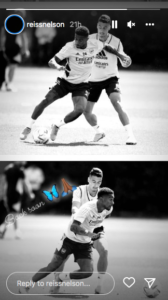 Since the post was put up by the 22-year-old we have had further news from CBS Sports’ James Benge who confirmed Nelson would be out for around two months.

Reiss Nelson facing a couple of months on the sidelines with a quad injury, I’m told. A frustrating blow for the winger at a pivotal moment in his Arsenal career.

Benge confirmed that Nelson had suffered a quad injury which will now leave him on the sidelines at a crucial time in his career, with so much uncertainty surrounding his future.

Nelson appeared to be one of the names on the list to go out on loan this season or even be sold permanently after failing to get in the same ranks as Bukayo Saka and Nicolas Pepe.

Having spent the 2021/22 campaign with Feyenoord, Nelson now enters the final year of his contract and it not looking positive to be signing a new deal any time soon.

Following the news, Arsenal may look to extend Nelson’s deal by another year and then later try to shift him out on loan in January.

That would be a purely financial decision to protect his market value, rather than let him leave on a free once the end of the season comes.

They may well now make the decision to rule him out of the Europa League and Premier League squad, leaving Nelson to rot until the next transfer window comes along.