English Right Backs are in vogue.

Amongst the ‘top 6’ clubs there’s Trent, Wan-Bissaka, Justin, Walker and James, but there’s also Walker-Peters at Saints, Ayling at Leeds, Baldock at Sheffield United, Cash at Villa and even Aarons at Norwich. Trippier too, further afield.

And in true Arsenal style, a few years behind everyone else, it looks as though we may be getting in on the act as we eye up Brighton’s 20-year-old English Right Back, Tariq Lamptey – exclusively revealed by Fabrizio Romano on March 3rd’s edition of his “Here We Go” Podcast.

“For sure, next summer, can happen something big for him. Arsenal are looking at him as possible option at right-back”, Fabrizio said. “Keep an eye on Arsenal because they are among the clubs interested in Lamptey.” There has been no other concrete information regarding Arsenal’s interest as of yet, with other sources simply linking back to Romano’s statement in their own coverage.

He’s a young man with a big future, clearly, but just what could Lamptey bring to Arsenal on the pitch? Is he the missing link on our right-hand side? Read on to find out…

Since joining Brighton for around £4m and taking the number 2 shirt in January 2020, Tariq Lamptey has excelled on the south coast. Having found his path blocked at Chelsea by Reece James and Cesar Azpilicueta after making his professional debut at the Emirates for Chelsea, an astute move has benefited both Lamptey and Brighton.

His main selling point is the constant attacking threat he provides with his quick, light feet and astounding pace; clocking a speed of 36.6 km/h at one point earlier this season, at the time faster than anyone in Europe in 19/20.

This speed, in part, helps Lamptey boast some impressive attacking statistics. According to FBRef.com, based on 1474 minutes played and when compared to other Full Backs in the top 5 leagues, the England U21 International comes out with 2.44 dribbles completed per game, putting him in the top 3% in Europe – not bad for a 20 year old. His low centre of gravity means he is especially good at nipping in and out of tight spaces and getting past his man, with plenty of touches in the final third and opposition box.

Lamptey possesses youthful exuberance and fearlessness. He loves to run with the ball at his feet – exemplified by his excellent dribbling stats, and he is also excellent at progressing the ball, with 7.2 progressive carries per 90. For context, Héctor Bellerín gets around 5.27. Graham Potter expects Lamptey to sit high and wide as the Right Wing Back in front of a back three, (seen below) and it could be argued that Lamptey’s injury has been the main driving force behind Brighton’s reversion to 4 at the back, as he is such a useful out ball and ball progresser. 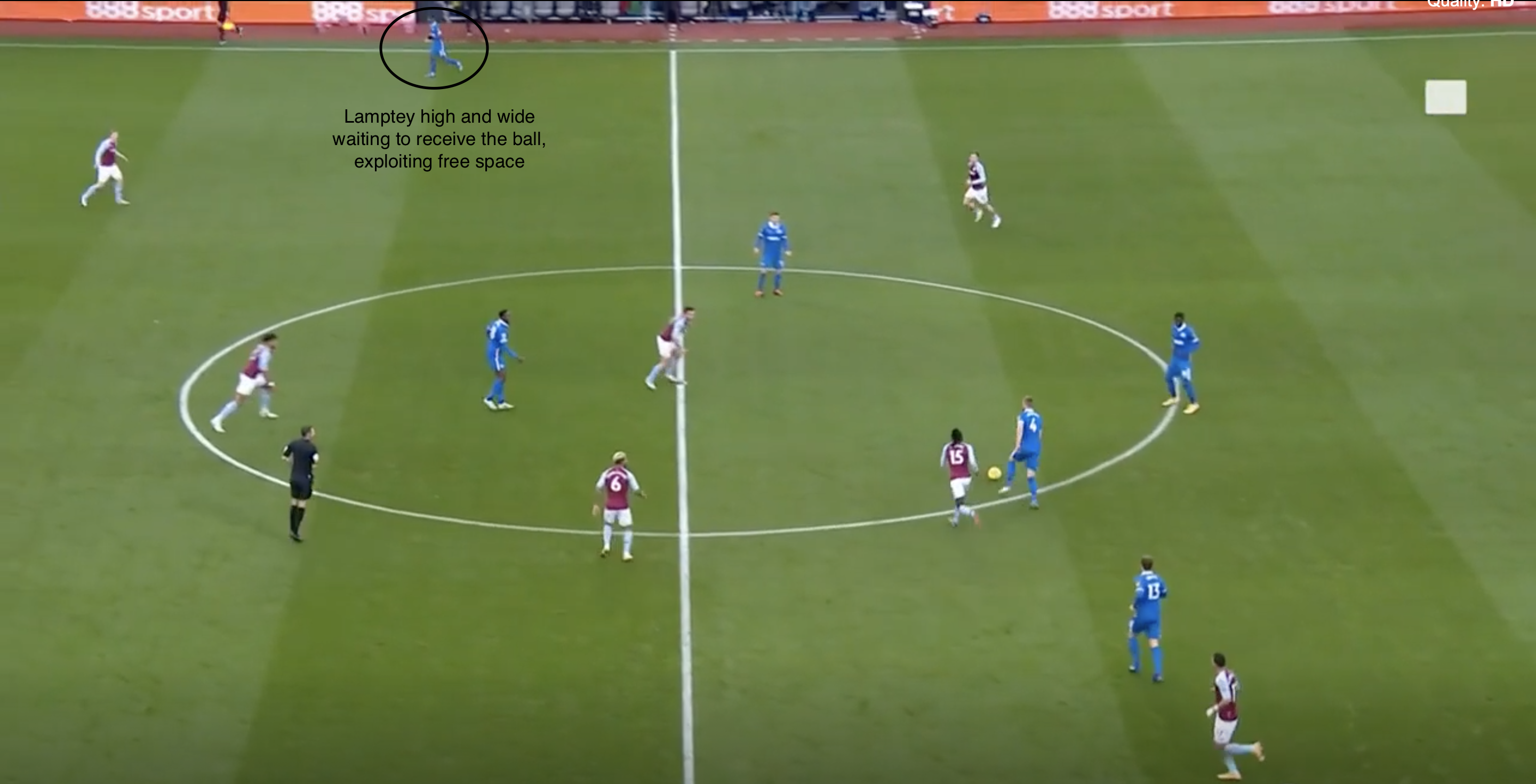 Lamptey possesses strong and accurate ball delivery, and if it weren’t for Brighton’s woes in front of goal this season he might have more than two assists in his Brighton career. At youth level he was prolific at getting in behind the opposition LB and firing shots in at the near post, but hasn’t had as much time or space at senior level, finding the net just once in 20 Premier League appearances for Brighton – so maybe room for improvement there.

Defensively, he’s actually not as weak in the tackle as his frame, position and attacking stats might suggest. He is good on both the slide and standing tackle, but he’s only got a 65% tackle success rate – exactly the same as another young attacking full-back – Trent Alexander-Arnold. His pressures and interception stats aren’t bad, and structurally he holds the line well and has the engine to contribute at both ends.

At just over 5 foot 4, however, aerial duels are not his strength. Understandably, in fairness. In fact, he wins just 0.55 aerial duels per 90 minutes, putting him in the bottom 11% of all Full Backs. He is also a bit injury prone – currently out for the rest of the season with a hamstring problem that looked a bit better than it ended up being. He also has a slightly patchy disciplinary record – 34 fouls in 20 PL games, a red card and 4 yellows.

In terms of whether he’d fit in at Arsenal… I’m not so sure personally. He’s not a massively “all round” full back. Perfect for a 3-5-2 or similar, in Arteta’s current lopsided 4-2-3-1 with Tierney often pushing forward, we probably require a slightly more physical option who can drop in as an auxiliary third CB in a post-Xhaka era, and someone who can contribute more physically to already a fairly small team. I’d be looking at Ruben Aguilar, or if Stan fancies sticking his hands in his deep pockets, Nordi Mukiele would be my first choice. But if Brighton go down, we could have a bargain on our hands that’s too good to refuse.

Welbeck To Start! How Arsenal MUST Line-Up v Swansea