After knocking out the current holders of the Premier League, Middlesbrough are in a position where they feel they can take on anyone. 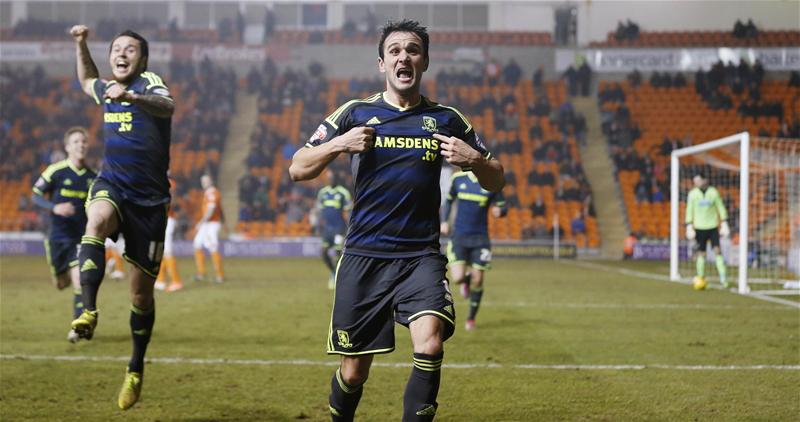 Following their 2-1 mid-week win over Blackpool, the Championship side have jumped up to top position in the league, with five consecutive victories to boast when they visit the Emirates on Sunday afternoon.

And they won’t be taking the journey lightly by the sounds of it, as Boro’ boss Aitor Karanka assured his side were in good spirits due to the reality of an automatic promotion chance to England’s top division coming up in May.

With that challenge, comes a serious competition out on the pitch for places, and Middlesbrough certainly hold the talent in a number of consistent positions, but we’ve picked out their three most influential.

Currently the clubs season holder for most assists and topping the chart for most goals scored in all competitions, this is a lad that is having the season of his life so far.

At 29 years of age, this is an attacking midfielder who brings a wealth of experience from both Ipswich Town and Sunderland, so he knows what it takes to beat the big boys. His most important asset is the way he reads the game, with his ability to cut passes through the smallest of gaps.

With Middlesbrough often being a long-ball team towards the death of the game, Leadbitter is the man waiting on the edge of the area to receive from the strikers, and he isn’t afraid to have a go from any distance.

Currently the midfielder has 12 goals in 33 appearances, and has already picked one up in the Cup, and what better chance to add to it by scoring at the Emirates. Much like the visit to the Etihad, these players won’t be fazed by the size of the stadium or change in atmosphere, and Leadbetter is the man in the changing rooms to nurture any of the younger players.

The good news is that standing at 5″10 the midfielder won’t be too much to handle in the aerial battles, it’s just ensuring our defensive midfielders can keep track of a player who likes to wonder. Click the page numbers below to see the rest of the article

The essence of tactical development — the space principle