Arsenal were once again professional in their dispatching of Southampton on Saturday. A 2-0 win thanks to a brace from Olivier Giroud made sure the Gunners stayed clear at the top of the league. With a busy Christmas schedule ahead, Arsene Wenger will be happy to finally have players returning, and it means he has a selection headache ahead of the Marseille game on Tuesday. With Walcott back fit and Flamini returning from suspension, it is in midfield where the crowd is gathering.

Below is what I would start with against Marseille. With the likes of Theo Walcott, Mesut Ozil, Keiran Gibbs and Mikel Arteta on the bench. This is not based on just resting players, but on form, Ozil deserves to be dropped. Arteta didn’t have his best game on Saturday and Gibbs has played a lot recently. Monreal is more than good enough to fill in occasionally, and this is a perfect fixture for him to do so. 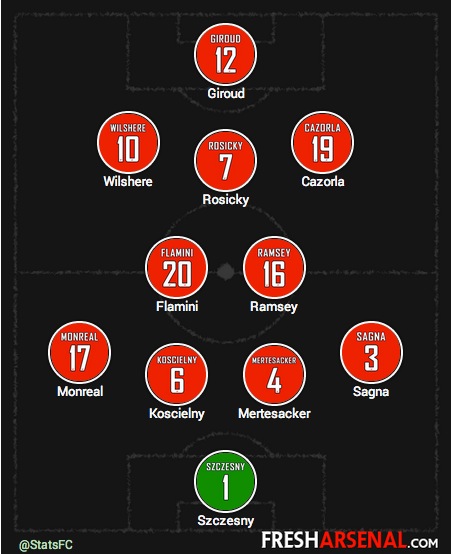 Create your own Arsenal XI using our Squad Selector

It is certainly pleasing to not be able to easily guess the Arsenal starting line up before a game, but Arsene Wenger will now need to make sure he rotates enough but not too much. Finding that right balance in a difficult Christmas period could make all the difference. Dropping Ozil for this game could give him a little wake up call, his place is not guaranteed in this side. The same goes for Santi Cazorla. Both Santi and Mesut are spectacular players at their best, but neither are playing well enough consistently enough at the moment to demand a starting spot. Theo Walcott will have to play his best football to get back into the side, and when he has competition, he plays a lot better.

Of course, the return of Theo Walcott could finally allow Olivier Giroud to be rested. But taking Giroud out of the Arsenal eleven creates a whole different dynamic. The focal point in attack, he brings others into play and can play in Arsenal’s one-striker system much more comfortably than Theo. The competition in the side stretches further back than the midfield, too. Vermaelen and Monreal have both impressed when given chances, and the current back four know that any mistake could see them dropped.

Ignoring the fact that Mesut Ozil cost £40million, what would you say is Arsenal’s current, strongest, midfield five? Please share your thoughts in the comments section below.
[divider]
Photo via Ronnie Macdonald – http://www.flickr.com/photos/ronmacphotos/

The Importance of being Flamini

Back Alexis Sanchez To Win The Golden Boot