It is always a difficult job, signing a second choice goalkeeper. The best stoppers will be playing first team football, so you either need to convince them to play a less important role, or settle for a keeper who you know is not the best. Arsene Wenger will be facing this problem in June when Lukas Fabianski’s contract expires. The Pole has performed admirably this season, helping Arsenal to a FA Cup Final, but he is set to leave upon the expiry of his contract in search of first team football. Fabianski has been stuck behind 24-year-old Szczesny, who has also been in great form this season. With Viviano’s loan deal also set to expire, Arsenal have no choice but to strengthen this area of the squad, but who should they target? Here is three keepers I’d like to see fill the void.

David Marshall
Marshall would be my first choice, but after being arguably the best keeper in the Premier League this season, it’s hard to see him wanting to leave to be second choice. At 29 Marshall offers experience but also has many years ahead, and would be well worth the cash investment of around £5million. If he is signed to a four or five year deal, Szczesny is bound to pick up injuries is this spell, and with Arsenal competing in several competitions, Marshall could be convinced into a move to such a prestigious club.
Positives: He is only 29 and amongst the best keepers in the Premier League.
Negatives: More expensive options than some of the others available.
Cost: £4million-£6million

Guillermo Ochoa
Ochoa is a goalkeeper I have been a fan of for some time and with his contract with French club Ajaccio expiring at the end of the season, he seems a perfect fit. Ochoa is a brilliant shot stopper and has 56 caps for Mexico at the age of 28. Ochoa’s agent has been talking up a move to a big European club in the summer, so it raises the question as to whether he would be happy with the second choice role available at Arsenal. Another problem could be his lack of experience in Europe’s top leagues. He has spent three years in France but before this his whole career had been played in Mexico. The player has openly said he would be willing to listen to offers from Italy and England.
Positives: He would cost nothing, is only 28 and a quality keeper
Negatives: Has no experience in England and unlikely to accept second choice.
Cost: Free

Jussi Jääskeläinen
At 39-years-old Jääskeläinen would certainly be an experienced addition to the Arsenal squad and he is still a quality keeper. He may be looking to retire when his contract runs out with West Ham at the end of the season, but he could be willing to join the Gunners to find that final paycheck, like the Schwarzer to Chelsea deal last summer. Jääskeläinen may only last one more year, but not only is he still a good keeper, he could be the perfect mentor for young Szczesny.
Positives: Free, likely to be happy with second choice and very experienced.
Negatives: 39-years-old and not getting any better.
Cost: Free 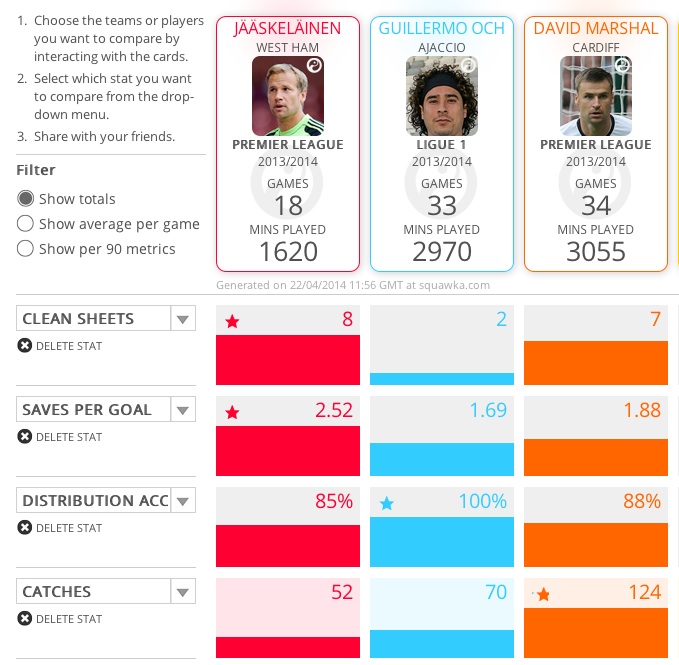 Using Squawka’s Comparison Matrix I compared the three keepers I have suggested Arsenal consider signing. Jääskeläinen managed eight clean sheets in just 18 games, a brilliant return. He has also made the most saves per goal at 2.52. Ochoa shines in the distribution category, whilst Marshall looks the strongest in the air, managing 124 catches this season. All three of the keepers have their strengths and weaknesses, but as I said at the start of this article, Marshall is my first choice. Ochoa is free, young and talented but would be a bit of a game. Jääskeläinen is the most realistic and safest addition and that’s why I think he could well be the keeper Arsene decides to sign come July.

Other cheap options include the likes of Schwarzer, Speroni, Harper, Friedel and Sorensen whose contracts all expire in the summer, and all have plenty of experience in England. All these options though, like Jääskeläinen, would only be a stopgap for a year or two – perhaps this is the best option?

With just one senior keeper at the club when June arrives, who do you think Arsenal should sign to help compete with Szczesny? Share your thoughts by leaving a comment below.