Arsenal, for the past few years have often been criticised for not having a plan B, A way to change the game when it’s not going their way. Wenger has been at the forefront of most of this criticism, and quite rightly as he hasn’t been able to adapt or make tactical changes to the side to affect the way we play against opponents. For example, this season he played his usual 4-2-3-1 formation in every away game against the rest of the top 4 and we were thumped 6-3 by man City, 5-1 by Liverpool and 6-0 by Chelsea. Towards the end of the season though, he tinkered with his formation in the FA Cup semi-final and final, by bringing on an extra striker (Giroud in the semi and Sanogo in the final), and on both occasions, this worked freeing up Giroud and giving the centre-backs an extra problem, as Arsenal went on to win both games. Hopefully Wenger will adopt this formation on occasions next season, as well as trying out some more alternatives, so we are better prepared for certain fixtures, that historically we’ve struggled with. 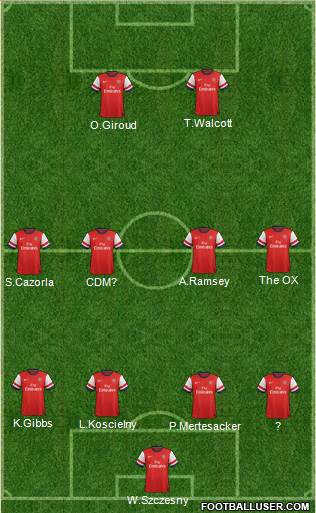 As we saw in the semi and final of the FA Cup this system worked very well. In particular, it seemed to bring out the best in Giroud, freeing him up and giving him more space to construct interchanges with Sanogo and the rest of the midfield. There is no question that this formation definitely made the difference in the final, and had Wenger not enforced it we may not have gone on to win the game. Sanogo playing off Giroud probably wouldn’t be the way to utilise this formation in the short-term, and with our large array of attacking midfielders it would be hard to fit every player in, as there are only two central voids to fill. If Wenger were to implement this side then I could see it working if Walcott played off Giroud and you had the OX and Cazorla to the sides with Ramsey/new CDM in the centre. As I said before though this could be a problem, as the like of Ozil, Wilshere, Rosicky, Flamini and even Arteta will be the back-ups for only one position. Despite this though, I think it could work, especially against the smaller sides at home, however, playing it away from home would probably be too risky. Use the page numbers below to navigate through the other suggested possible formations.

4 players set to leave Arsenal next summer will free up more than £600,000 per week

4 Central Defenders Arsenal Could Sign This Summer To Bolster Backline