Arsenal begin another Premier League adventure on Saturday evening and hopefully it brings some success. The Gunners are better equipped for a real go at the title this season and will be full of confidence following FA Cup and Community Shield success. But how will the Gunners line up on Saturday? Who is injured? Where do our strengths lie and where are the weaknesses? Let’s see.

Arsenal are never the luckiest with injuries but things aren’t too bad at the minute. Theo Walcott is continuing his recovery, whilst David Ospina is struggling and looks set to miss another few weeks. Laurent Koscielny is unlikely to be fit for the match. Abou Diaby‘s whereabouts remains unknown but he won’t feature against Palace. Koscielny and Diaby have not been officially declared injured, but expect clarification of these injuries in Arsene’s pre-match press conference on Friday. German trio Per Mertesacker, Lukas Podolski and Mesut Ozil remain unavailable due to an extended international break. 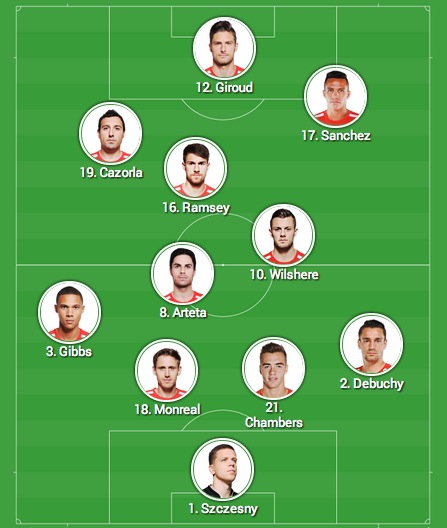 Create your own Arsenal XI using our line-up builder here

Sanchez, Cazorla, Ramsey and Wilshere all look on form coming out of pre-season and all look fit and exciting. It will be incredibly hard for any Premier League side to stop these players from creating chances and scoring goals. Expect Arsenal to click from the off, just like they did against Manchester City with a similar looking attacking line-up.

The obvious weakness is the centre of defence. Neither Monreal or Chambers have played centre back at senior level before. Honestly that is a recipe for disaster. That’s what happens when you have just two centre backs in the whole squad. Reassuringly Chambers has looked pretty solid in that position in pre-season and against Manchester City. Monreal was more shaky and is quite clearly not a centre back. Cross your fingers for no calamity’s.

I can see us conceding but I think we have too much in the attack for Palace to resist, despite Pulis’ defensive record. Arsenal will be in a confident mood and we will have the likes of Campbell and Chamberlain on the bench to make a difference.

Agent Talks Up Potential In Player Plus Cash Deal For Higuain