The hunt for a striker continues, from a £40 million pound bid for Luis Suarez in August to a deadline day loan-swoop for Demba Ba, Arsenal haven’t had any luck in their never-ending search for a striker.

It would be unfair to single out one player because of the amount on injuries, but Olivier Giroud has had his critics since the day he arrived and it’s expected the club are planning a mass overhaul in the striking department in the summer.

The club seem to be planning ahead for next season and have been heavily linked with Nuremberg starlet Josip Drmić, the Swiss international who has 16 goals this season, one less than Bayern’s Mario Mandžukić. Here’s all you need to know about the 21-year-old forward.

He was born in Switzerland to Croatian parents and began playing for FC Zurich as a 9-year-old. He honed his skills in the academy until in 2009, a 16-year-old Drmić was given a chance in Zurich’s reserve team.

Despite his age, he didn’t let the step up faze him and managed to impress the first team coaches who were willing to promote the youngster the Zurich’s first team at the tender age of 18.

Zurich are traditionally once of the biggest clubs in Switzerland and the promotion to the first team meant that Drmić got a taste of the Champions League – a competition the youngster will surely get more accustomed to as his young career progresses.

With a lot of football clubs facing financial uncertainty, smaller clubs are utilising scouting systems more and gambling on younger, foreign players who are seen as better value for money and that’s the case with Drmić, who was plucked by Bundesliga club Nuremberg last summer.

They took a gamble and paid €2.2m for his services, which is probably the bargain of the season considering how well Drmić has played.

Despite his efforts, the club face a desperate fight to stay in the league and the reality is they would probably already be relegated if it wasn’t for the performances and more importantly, the goals, which Drmić has contributed to the Frankenstadion-based club.

The striker has 16 goals to be precise and is in the hunt for the golden boot alongside Bayern Munich’s Mario Mandžukić, which is impressive considering Mandžukić is playing for a club at the opposite end of the table and lets not forget the fact that this is Drmić’s first season in German football.

The essence of Drmić is his versatility. This season, he has played out on both wings and as the target man. Arsenal have lacked variety up front this season so Drmić would be ideal in that sense.

He is pretty much the complete player, he is strong enough to hold onto the ball with his back to goal, but also has the pace to run into the channels and the trickery to beat his man and either assist or shoot.

He isn’t afraid to dribble and has a good dribble success rate which would no doubt improve if he played at a top club, rather than relegation strugglers, given the increase in quality around him.

Both footed, he doesn’t strike you as the type of person to lack self-confidence as he has shown when put in front of goal this season. He’ll have the opportunity to showcase his talents at the World Cup this summer which will give a good indication of whether he can handle the top flight.

All in all, Drmić would be a very good addition to this Arsenal front line. He may not be the solution immediately, but he won’t come to warm the bench at the club. He’ll want Olivier Giroud’s starting berth which would be good competition for the Frenchmen.

Arsenal have been very strongly linked with him these past few months with former Germany midfielder Lothar Matthaus telling German newspaper BILD, that Drmić will join Arsenal for €8 million adding, “I’m always right”.

A few contrasting reports have denied this and it has appeared that Bundesliga club Borussia Dortmund are also keeping tabs on the striker, so Arsenal will need to act quickly if they are interested.

A lot has been said elsewhere, but in any case, €8 million for a 21-year-old striker that has scored 16 goals in for a relegation-threatened side, should be worth a gamble.

He has expressed his admiration for the club and Arsenal appear to be in a good position to lure him the Premier League.

Do you think Drmić is the answer for Arsenal? 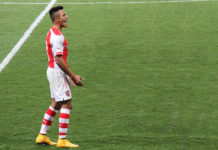 Why Arsenal Should Ignore Alexis Sanchez’ Plea For Signing 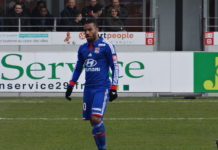 Analysis: What Alexandre Lacazette Would Bring To Arsenal

Looking forward to a Cup final and next season

Paulista And Coquelin To Start! How Arsenal Should Line Up Against...

Pochettino To Take Arsenal Midfielder To Tottenham This Summer