Alexis Sánchez was the talk of the town after Arsenal’s 1-0 victory over Beşiktaş on Wednesday night. Arsenal’s 17th successive Champions League qualification added around £7 million to their coffers; therefore by scoring the winning goal just before half time Sánchez repaid Arsenal almost a quarter of their initial outlay on him. Each subsequent home group match will add around another £3 million to their revenue.

However, in the media it wasn’t all praise. According to the Daily Mail “Alexis Sanchez found the net for Arsenal but is no target man and reaffirms Gunners’ striker needs without injured Olivier Giroud”.

In their article The Guardian stated “Alexis Sánchez strikes for Arsenal but struggles in lone spearhead role”.

The general consensus in these articles appeared to be that Sánchez has to learn to play more of an integral role within the Arsenal team before he can become a true No 9.

The touch and heat maps below shows just how much ground Sánchez covered outside of his target area during Wednesday night’s match. 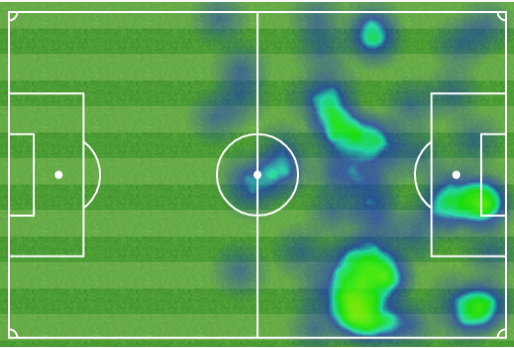 With more than one chance at scoring a goal – he missed a golden opportunity at putting one past the Beşiktaş goalkeeper in the 53rd minute – at times Sánchez appeared to be hesitant. He was also found to be playing in the wrong place at a key times. However, we shouldn’t forget that last season Sánchez scored 19 goals during his 34 games for Barcelona in La Liga. The majority of those goals that Sánchez scored came from inside the area. In addition to that tally he scored two goals in his four appearances for Chile in the World Cup this summer.

I believe that once Sánchez has found his feet, found his confidence and settled into the team it won’t be too hard to see him becoming a prolific goal-scorer for Arsenal when partnered with a suitable team mate; whether that be another forward or one of our many capable midfielders. I’m sure we all know what a difference a good strike partner can make.

With the summer transfer window closing at 1pm BST on 1 September 2014 it’s looking highly unlikely that Arsene Wenger will be splashing out the cash on a new striker. According to reports this week Wenger’s already turned down the chances to buy Danny Welbeck and Loic Rémy. With Giroud out on injury for 3-4 months following surgery to repair a break to his tibia and with no definite news as to when Theo Walcott will be returning, Arsenal are looking pretty thin on the ground up front.

So let us all hope and pray that Alexis Sánchez’s goal will be the first of many and that when the goals do arrive they come sooner rather than later!

Opponent Focus: An In-Depth Look At Chelsea Ahead Of The Community...

Arsenal Line Up To Beat Liverpool