After a successful trial at London Colney, promising young Swede Kristopher Da Graca will join Arsenal’s youth setup at the end of the season after also having trials with Tottenham Hotspur, Chelsea, Aston Villa and Malmo FF.

As he was born in June 1998, he is not eligible to sign scholarship terms until he reaches the age of 16, so for the remaining season, the Sweden Under-16 international will stay at Hisingbacka FC (currently competing in the Swedish fourth tier).

He said: “Yes, we are in full agreement with Arsenal. We had some discussions but now we are in agreement.

“One must think of the player as well and see more than just numbers. We are a pretty small club and do not want to stop him.

“We did get more than their initial offer, so to speak, and for a club in our division it is obviously good money. The agreement also increases on clauses. It is a package.”

Da Graca is primarily a centre-back, but offers versatility with his ability to play as a defensive-midfielder.

“Arsenal are a big and good club,” he told Swedish media.

“I’ve had a chance to become a good soccer player, it feels good. At first though I will have to train with them in my own age.”

“It could be next week or the following week [on signing the contract].”Moving to England is confirmed but not this year.”I will move there the summer of 2014. Me and my dad wanted me to [get my] education first.”Upon joining the club, he will join 18 year-old Kristoffer Olsson (who recently made his first-team debut in the Capital One Cup against West Bromwich Albion), and 16 year-old Jamal Raage among the club’s Swedish contingent.

It is highly unlikely that he will make any first-team appearances in his first few seasons, but perhaps he could aim to breakthrough into the Under-21 side towards the end of the 14/15 season. 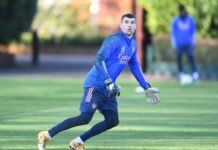