He was one of the many dramatic trolley-dash purchases made by Arsenal on deadline day in 2011, following Arsenal’s humiliating defeat at Old Trafford. After his arrival he was dubbed a panic buy, and his pace was often targeted and gave the sceptics a lot to talk about. Two years on, Arsenal prepare to travel to Old Trafford once again, but in very different circumstances.

Mertesacker symbolises the changes made by Arsenal over the last three years. As much as Ozil’s addition has added fresh quality to the team, the improvement of the current crop is what has impressed most, especially in 2013. The likes of Laurent Koscielny, Keiran Gibbs, Aaron Ramsey, Olivier Giroud and Mertesacker himself, have all been heavily criticised at times – deemed not enough for a side of Arsenal’s calibre. Each player has dug in, improved, and become essential cogs in a new well-oiled Arsenal machine.

Arsenal’s defence was at the heart of criticism over the last few years. This season, and last, Arsenal have made many strides forward in that department. Laurent Koscielny and Per Mertesacker have developed an understanding that can be compared to the best in Europe, leaving Thomas Vermaelen to watch from the sidelines. Whilst Koscielny was also heavily criticised, I feel he is now getting the deserved recognition for his quality performances. Per Mertesacker, however, continues to be without much credit, and last night in Dortmund showed exactly how good he is.

29-year-old Mertesacker has 94 caps to his name for Germany, but it was only in his second season where he started to show that experience and quality. Like many players arriving from overseas, Per needed that time to adapt to the pace and dynamics of the Premier League. He’s added a stabilising presence at the heart of the Arsenal defence, and his qualities pair perfectly with partner Koscielny. Whilst Laurent loves to come out of the defence to intercept, as a front-foot defender, Per adds the gel. With an obvious commanding presence in the air, he sweeps the defence, using his long legs to read the game excellently and this is illustrated by his stunning disciplinary record. Together, they are getting better with every game, and after clean sheets against Liverpool and Dortmund in the space on four days, the doubters are beginning to be silenced. 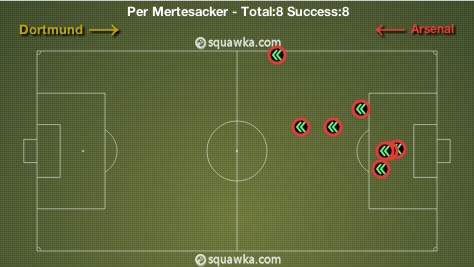 Mertesacker was my man of the match last night – successfully completing a massive eight clearances, two tackles and winning two headed duels. With an 86% pass success, this is another sign of improvement in his game and an area he had to improve on in order to adjust to Arsenal’s passing system. The German impressed further with three interceptions, and some coming surprisingly high up the field.

It might be a bit too soon to brag about Mertesacker’s quality, but he definitely deserves more recognition than he is currently getting amongst the press. He has delivered this consistent quality over the last year, this should be enough to be considered as one of the best in the league. Per and his partner Koscielny are early contenders to be included in the team of the season.

Many laughed and said Arsene Wenger was losing his mind when he repeatedly declared the quality his squad had in times of trouble last season, but so far this campaign, he is once again being proved right – long may it continue.