If you go on twitter you’d think Arsenal were relegation fodder. Don’t hide, we’ve all suggested this one time or another, in various degrees. Second in the league, and sandwiched between to wealthy giants. Hard times.

Yes, we are still well in the mix, yet the warning signs refuse to go away, and the déjà vu is slowly unravelling again, like the season before, and the season before that. That’s why you can forgive some fans for being on the brink of a meltdown after being absolutely demolished by a Liverpool side with Kolo Toure and Skrtel in their ranks, (I still don’t sleep at night. Forever traumatised). And then following on from that, we draw at home, and fail to score against a United side, who are bang on the Wigan Athletic scale. Seriously, they were so poor, and are still so poor, that I’m not sure what the more embarrassing result was. And that just shows the current times.

What a weird season, getting stranger all the time. I can only imagine that everything feels very surreal to Liverpool fans. But the problem with Arsenal, is they simply can’t seem to escape drama. It happens every season, and at the same stage, right before a titanic champions league tie.

This is the time Arsenal’s season infamously collapse, and they’re really good at it, too. Injuries are ruining the team. Again. We’re limping on without our best players. Again. The media’s at our throats. Again. We’ve suffered humiliating defeats. Again. There’s a clear pattern, it’s as if Arsenal are stuck in eternal loop of excited breath and massive deflation.

This season promised so much, and still can, yet it’s looking harder and harder. So many ifs…Walcott, Ramsey, striker, Draxler. Another season of ifs? How original, Arsenal. I still feel that some Arsenal fans, and everybody else, don’t understand the importance of Theo. Make no mistake, he is Arsenal’s best player, and has been for the past two seasons, leading in both scoring and assists. We’re an inferior team without him, who struggle to think of ways to score when he doesn’t play. And being without Ramsey makes it difficult to see beyond Munich. Look at Hazard’s goals/assists contribution for Chelsea? Toure and Negredo’s for City? Suarez and Sturridge’s for Liverpool? They are carrying there respective teams. Stats wise, their key players are fit. Remember that.

I like Giroud. He’s a warhorse. Works hard, doesn’t stop fighting for the team. But his deficiencies are crystal. At the moment, all it looks we’re doing is playing table tennis with Giroud, constantly knocking the ball into him, only for him to mirror it right back. It makes for an incredibly frustrating viewing. It’s not all his fault. There’s no runners. But that doesn’t excuse chance conversion, and when you really think about the chances he misses in big games, defining games, it is simply bad.

The Ozil hate has materialised again. He’s a playmaker, he creates chances when players attack space. But what’s he supposed to do, when there’s nobody showing enough bottle to make an effort and run in behind defences? Of course, he’s going to pass sideways. There are no options in front of him. Someone like Theo would change that, and everything. Which is why I can’t understand the lack of trust in Gnabry and Podolski, especially in the last two games? They have pace, they drive forward, they attack, and they give width. I don’t get this obsession with playing through the middle, when nobody bursts beyond the defence anyway. It’s also worth noting that Podolski is Germany’s youngest player to hit 100 caps. That must be because he’s rubbish. Seeing him warm the bench is quite baffling.

Anyway, it does no good being constantly negative (So I’ll stop now) about your own team, the team your support, the team you love. Just try to relax, get behind the team (that’s playing), and resume anxious nail chewing. We can hope to stay in the mix and hope this team, with the likes of Koscielny and Mertesacker, don’t let the season crumble in the common fashion. By all means, express disappointment. But sending hate mail to our players is idiotic. That’s sure to give them a right boost.

We’re over achieving this year; our key players aren’t here for the ride, so sit down tight and accept that we might not have enough to go all the way.

Oh, I almost forgot. Robin, the answer is no. 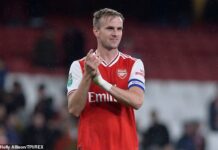 Fabregas: ‘Arsenal are in my heart, I could return one day’