After an uninspiring 1-0 win against WBA at the Emirates last week, Arsenal will want to keep their current unbeaten run going into the FA Cup Final. With Oxlade-Chamberlain still out, the squad welcomes back Aaron Ramsey, Jack Wilshere and Kieran Gibbs to the first team. Norwich are effectively relegated, the only thing preventing this is a huge goal swing in their favour. A highly unlikely occurrence given their goal scoring problems this season.

With the FA Cup Final just over a week away, Arsene Wenger will want to rest key players to ensure his strongest 11 is available for the Wembley clash against Hull. Is the final game of the season too soon for Jack Wilshere to get some game time after being out for the last few weeks? Should Diaby get a run out at some point or does Benik Afobe get a chance to shine in a match which has no implications for our final position in the league.

With Norwich on the brink of relegation and with just 1 win under manager Neil Adams, the players will want to end the season on a high and give the home crowd one last taste of the big time. I expect the game to be physical and for the home side to try and impose themselves as they did against Chelsea last week. Arsenal have the quality to get the 3 points and as players are coming back into the squad Arsene Wenger can save some players for Wembley.

A very solid season for the Arsenal number 1 and only second behind Petr Cech for clean sheets in Premier League this season. With Fabianski expected to start the FA Cup Final an argument can be made for him to start the final league game of the season. But with a few defensive changes on the cards some consistency at the back is needed.

Gibbs is back in the squad but should be rested for the FA Cup Final. Sagna has been solid but the game brings an opportunity to give Jenkinson a run out and rest Sagna ahead of what is increasingly looking like his last game for Arsenal. A Centre back should be rested, in this case Koscielny, for the Norwich game with Vermaelen coming in to the back four alongside Mertesacker.

At the base of the midfield not many fans would disagree that Arteta and Ramsey have been the stand out pairing. Flamini should start to give the midfield some bite. With Wilshere back in the fold, it was a close call between him, Kallstom and Diaby but Kallstrom gets the nudge from me as neither Wilshere nor Diaby have played recently. My fear of Diaby picking up a knock is behind this choice but I’d give him a run out for the final 25 minutes.

A lack of wide options mean a run out for Podolski and Cazorla on the wings. Ideally, Gnabry would be available and occupy the starting spot on the right but injuries are keeping him and Oxlade-Chamberlain out of the reckoning. Rosicky to come in for Mesut Özil who should be rested ahead of the FA Cup Final. Rosicky and Cazorla rotating should cause problems for the Norwich defence.

A part of me thinks Afobe should get a start and showcase his skills on the big stage. However, Sanogo has performed admirably in the games he has started and his first Arsenal goal is not far off. A rest for Giroud who I back to start at Wembley.

Now Arsenal are nearing a full strength team and a cup final, the importance should be on ensuring key squad players are fit and fresh for Wembley. The selected players are more than capable of beating Norwich and keeping the current unbeaten run going, some may even be playing for a starting role in the final. Players like Monreal, Flamini, Rosicky and Sanogo are all in with a shout to start at Wembley, a good performance on the final day of the season may be what secures a role in the final.

With the result against Norwich unimportant Ramsey, Koscielny, Ozil and Giroud should left out of the squad as they’ll have a big say in who lands the FA Cup on May 17th. 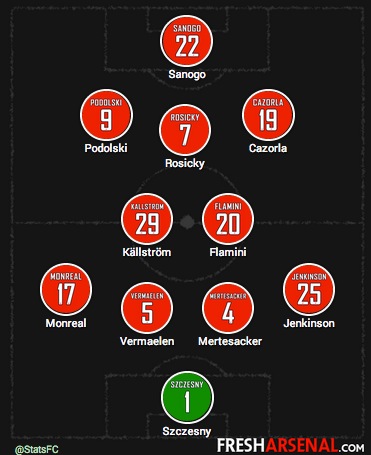 Beckham’s 3 Sons Are Gunners – Arsenal Tweets Of The Week

Debate: Should Arsenal Have Signed a Striker In January?