It’s certainly been a busy summer at Arsenal, with plenty of new faces and even more leaving the club. We’ve put together the graphic below that looks at everyone who has joined and left the club over the summer months.

Arsenal’s summer started fairly slowly, but as we reached the conclusion of the window, their activity accelerated a fair amount.

Moves for Nicolas Pepe, Kieran Tierney and David Luiz in the final days of the window certainly left fans with a large amount of excitement. But even after the English window slammed shut, the Gunners were still active, and crucially managed to continue to make some sales.

Alex Iwobi joined Everton on the English deadline day, leaving many to think that Henrikh Mkhitaryan would be sticking around. But the Armenian international was also ordered to leave, on a loan deal to AS Roma. This has reduced the wage bill substantially, whilst opening the door to young players like Nelson, Saka and Martinelli who will now have more opportunities to excel on that left side of midfield.

Below we have designed a graphic which takes a look at all the In’s and Out’s at the club this summer and from that, we can see how the club has taken such a huge amount of their wage bill, despite improving their playing squad. 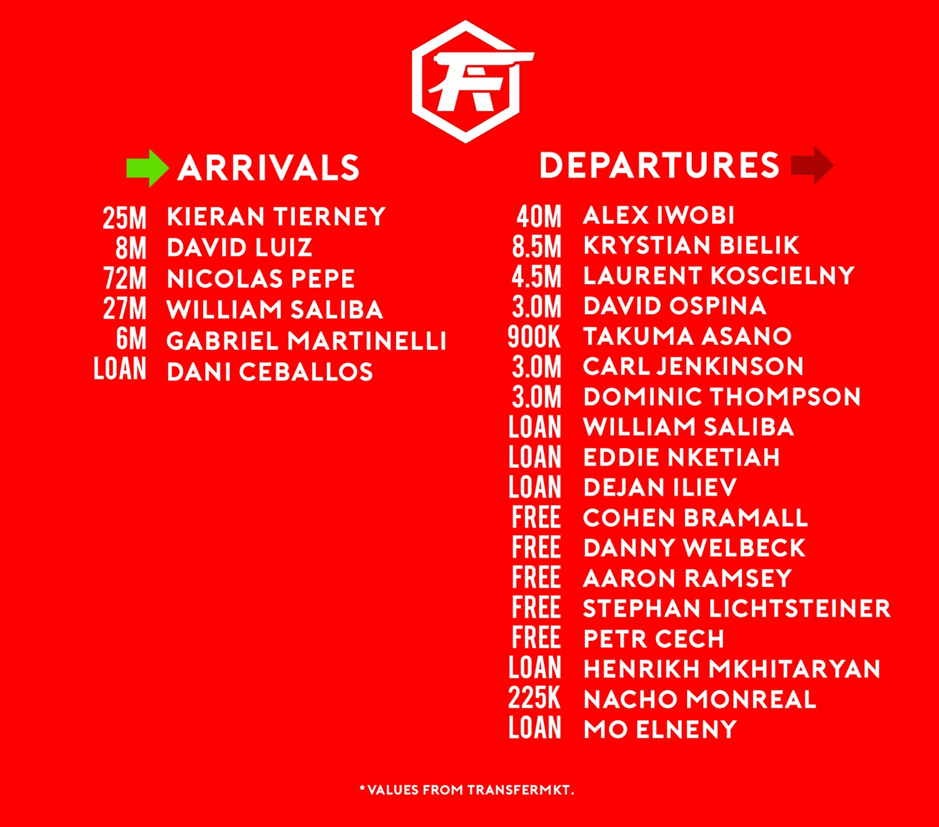 Transfers Curt Goff - August 17, 2022 0
Aston Villa are reportedly lining up a shock move for one of Arsenal's defenders as they aim to recover from a long-term injury suffered...

Transfers Curt Goff - August 16, 2022 0
Arsenal could be about to make a huge amount of progress in their summer transfer window in the form of a heavyweight departure. http://gty.im/1411844529 According to...

Transfers Curt Goff - August 15, 2022 0
Arsenal have announced the loan departure of a fourth first-team player, with goalkeeper Alex Runarsson joining Alanyaspor for the season. http://gty.im/1407344932 The 27-year-old joined the Gunners...

Arsenal Oli Price-Bates - August 15, 2022 0
Oli Price-Bates and Pet Berisha look back on an eventful Saturday afternoon at The Emirates, with Arsenal winning 4-2. Amongst the topics discussed are Gabriel...