As always, the rumour about Cesc Fabregas rejoining Arsenal is doing the rounds again. Barcelona have just appointed a new manager and he is supposedly planning a big summer clear-out, with the likes of Pedro, Alexis Sanchez, Javier Mascherano and Cesc Fabregas all expected to leave. Arsenal, of course have the contractual agreement with Fabregas, that if another club comes in for him we have the buy back option in place. Unless an English team attempts to sign him then I don’t see Wenger activating this clause, because quite frankly he’s not what we need.

At the moment we are blessed with attacking midfield options and adding another one to the collection may stunt the progress of others. Some will say that because many of these players are often injured then there is a need for more attacking options, as we struggled to create goals last season when the likes of Ozil, Ramsey and Chamberlain were out. Although this may be a valid point, you’d hope that the injury troubles at the club will be resolved this summer and this will be a feeling of the past. When everyone is fit then Fabregas definitely wouldn’t be a starter in the current 4-2-3-1 formation Wenger adopts. Ramsey is the first name on the team sheet, and will be accompanied by a new holding midfielder or Arteta. In front, you have Ozil, who on his day is probably better than Fabregas and you’d also hope he’ll have adapted to the English game and will be an even bigger presence next season. Then as back-up for these positions we have, Wilshere, Diaby, Chamberlain, Rosicky and Flamini with Cazorla, Walcott and Podolski occupying the other forward positions. Looking at those names shows that in the current system that Wenger plays there would be no need for another creative player, unless others depart during the summer.

The above probably seems very negative, I wouldn’t however begrudge the signing of Fabreags, I just don’t see it as very necessary. If Fabregas is going to be available then I believe Wenger will sign him, but only if he were to join an English club instead. Whilst Fabregas wouldn’t fit in with the 4-2-3-1 formation, there is a way to accommodate him in the side. 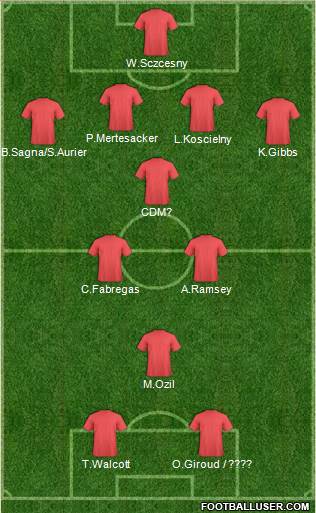 Playing him with Ramsey in the heart of a diamond could work, provided we can get a more destructive midfield player to play behind them. It would be a similar system to the one Liverpool utilised so well last season, containing less speed and power but more creative guile.

Ultimately I would love to see Fabregas back at the club at some point. Now is not the time though. We have too many players that are of a similar nature, yes some may be ageing and injuries occur regularly but  I still don’t see now as the right time for a return, especially in the current 4-2-3-1 formation. The 4-4-2 Diamond could accommodate him nicely but I highly doubt Wenger will be prepared for this tactical change. Some day he’ll return, but now is not the time.

Arsenal’s best XI of the season