The home debut of Alexis Sanchez was certainly responsible for the enormous levels of enthusiasm and expectation that were bubbling out of the Emirates Stadium before Arsenal’s first Premier League game against Crystal Palace last Saturday. In a market where players such as Ross McCormack and Shane Long are changing clubs for fees in the region of £12 million apiece, the signing of Alexis for £35 million is nothing less than an downright steal. Indeed from the very first minute, Alexis immediately began to endear himself to the Arsenal faithful; having lost the ball in an attack on the right-hand-side, he showed impressive drive and determination to track back against Joel Ward (a player who has long been deserving of an opportunity to show how he can solve England’s problems at right back) and win back possession. For me, this, along with his impressive Opta Chart, is indicative of the stalwart, purposeful footballer that is Alexis Sanchez. He is a player with undisputable pedigree, having notched up an impressive 42 goals and 22 assists over the last three years at Barcelona, and on Saturday, Alexis showed that despite his diminutive size, he (along with Mathieu Debuchy) is strong and robust enough to provide some much needed steel and power to Arsenal’s team, a requisite of any side wishing to challenge for the title. The importance of determination, work-rate and strength in a player cannot be understated, especially not in the eyes of the fans, and it is as striking as it is uncoincidental that Arsène has recently looked in the transfer market for characters that embellish such fire and steeliness (such as Alexis, Debuchy, Chambers and Flamini last year). Jamie Carragher, who recently said that the current Arsenal team are lacking ‘a spine’, even credited Alexis in his attempts to disrupt Brede Hangeland’s run across the box for Palace’s opener, saying he did exactly what was asked of him as per the zonal system, not allowing Hangeland an easy run across the box. No blame can be attached to him for such an excellent run and header by the centre-half. 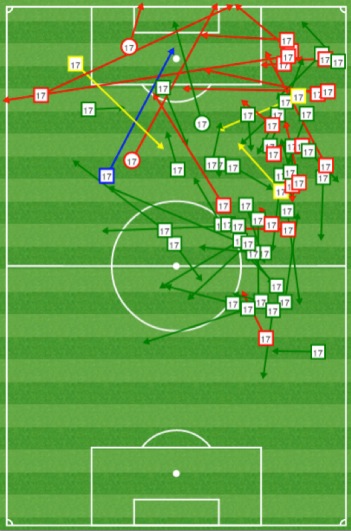 However, as the game progressed it was clear that Alexis, like the majority of our team, was  suffering from general rust in his game, and was a long way off his brilliant, effervescent best, wasting four good crossing opportunities and not really ever testing Julian Speroni (only racking up one shot on target, with his other effort blazed high, wide and not very Giroud). Wenger alluded to how he did not believe his team to be ready in his pre-match press conference, saying that ‘we could have done with one week later in all the competitions’, a fair comment given that the World Cup only finished just over a month ago. Nonetheless, in a game where the result rather than the performance was paramount, Sanchez did certainly demonstrate flashes of his tremendous talent, providing his most telling contribution just before the break when he swung in a delightful free-kick that Laurent Koscielny powered home to level the scores. It was not simply a touch of class that sent the Arsenal fans into raptures, out en masse – over 60 thousand strong – but a decisive goal that broke Palace’s resolve, all the more ironically, at their own game, a set piece. There were other exciting moments as well, predominantly Sanchez’s neat-link up play with his teammates, encapsulated by a wonderful back-heel in the first half where he freed up Debuchy down the right, setting up a valuable chance to cross. In addition to this, he showed time and time again a desire to take on his opposite number, often drawing an extra Palace defender to mark him, freeing up space for Ramsey, Debuchy and others. This will prove so invaluable upon Özil’s return to the side, as Mesut and Alexis will strike fear into the hearts of the opposition with their elusive runs and supreme vision, drawing defenders away from their teammates. After the game, Wenger made an effort to credit Palace for their role in frustrating Arsenal for large parts of the afternoon, something that cannot be ignored when discussing Alexis’s contribution. Just because Tony Pulis departed in such acrimonious circumstances it does not mean that he did not managed to instill his characteristic defensive solidity into this Palace outfit. During the latter part of last season, the oft-repeated jape of ‘doing a job at Stoke away on a Wednesday night’ had swiftly evolved into getting all three points at Selhust Park, something that Manchester City, but crucially not Liverpool or Chelsea, were able to do in the latter part of last season. Palace were very well-organised defensively, not allowing the Arsenal players the time and space on the ball they crave, posing a stern test to the home side. Alexis often sought to change the pace of the game with clever lay offs and swift exchanges, but also used his supreme trickery and speed when running at defenders, showing how he is an extremely active, dynamic footballer that has the ability to create something from nothing. While he lacked a clinical edge at times on Saturday, this is something that will certainly come with time, and will undoubtedly be aided by the efficiency of players such as Ozil and Podolski. He may take a few games to settle in and find his feet in this promising Arsenal side, but Alexis Sanchez certainly has the look of a wonderful footballer, and hopefully his joyful celebration when Ramsey slammed home the game winner is the first of many over a long season. The debut was a foretaste of what is to come, an allusion to greatness, but one that still left a fair amount to be desired.

Keown Reveals Arsenal Midfielder ‘Came In To Train On His Day...

The Unpopular Blogger: Why Wilshere Should Smoke More Often