Through a mix of analytics from several data sources, fan player ratings, transfermarkt value and more, we calculate and report The Fresh Arsenal Power Rankings weekly, exclusively in this newsletter. Rankings will be altered based on recent performance (last 6 games) as well as being anchored by season-long data. Every week we will show you the updated rankings with some performance observations as to why these changes have happened. 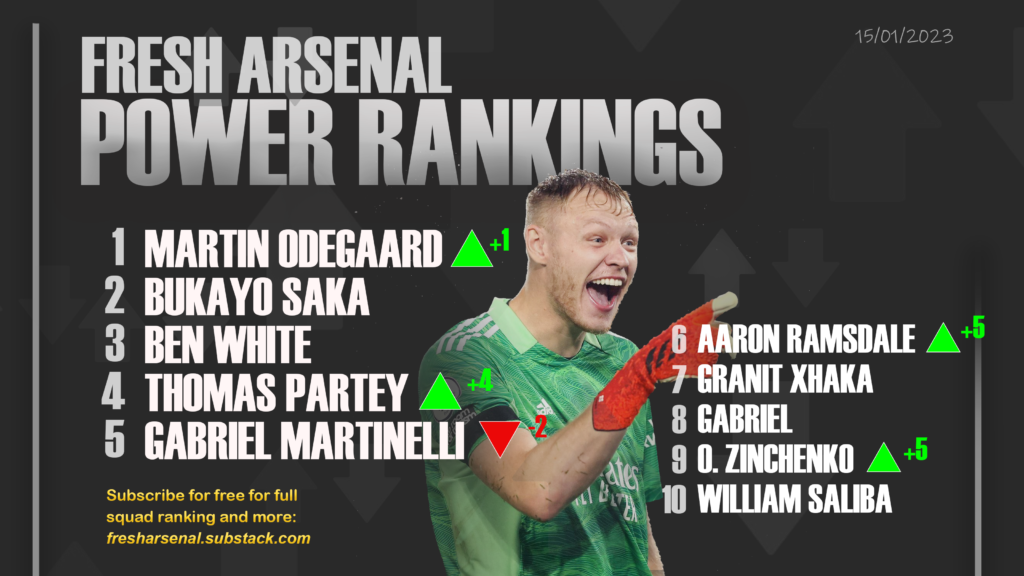 After Arsenal’s 2-0 win at Tottenham, there have been some significant shifts in the Power Rankings.

Risers: It was a fantastic day for Aaron Ramsdale. The man of the match on the day and as good as Arsenal were, he made key interventions at important points to ensure Arsenal kept a 2-goal cushion throughout. His distribution was also elite.

Zinchenko is back to full fitness and really showing his influence in this team, he’s into the top 10 for the first time.

Martin Odegaard’s goal has seen him edge ahead of Saka to claim top spot, whilst Thomas Partey’s influential performance sees him move back into the top five.

Fallers: Gabriel Martinelli has dropped a couple of places after failing to score for a few games. His fall, like William Saliba and Gabriel’s are more due to the sensational performances of the players around them, rather than anything they have really done wrong.

Sign up to our new free weekly newsletter to get the updated Arsenal Power Rankings to your inbox every week, plus lots of other Arsenal content here.