Arsenal defender, Hector Bellerin has created the most clear cut chances in the Premier League this season, according to Sky Sports.

20-year-old Bellerin only broke into the Arsenal first team last season, but he has become a regular in the team and his attacking threat is vital. The six ‘clear cut chances’ he has created in the Premier League so far this season is the leagues most. He sits ahead of Santi Cazorla and Mesut Ozil, who both sit in the top 8. 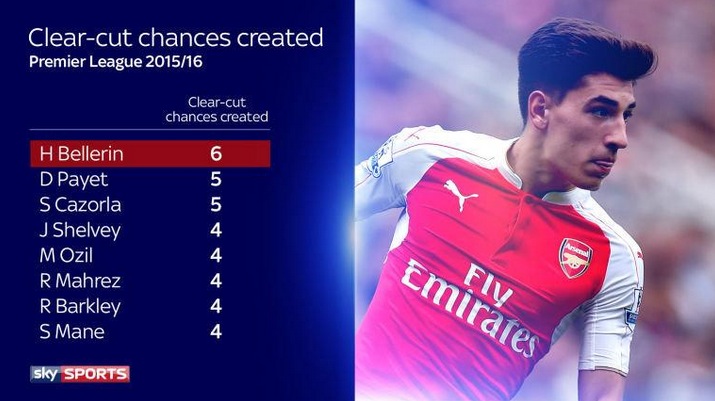 As you can see, Bellerin leads the way with six, whilst Cazorla is joint second with 5 and Ozil not far behind on four. Bellerin is the only defender in Sky Sports’ top 8 list.

Mathieu Debuchy has been moved to the bench in order for Bellerin to play in the first eleven and considering how effective the Spaniard is in the final third, you can see why. Nacho Monreal is more of a defensively strong full back, so having Bellerin on the right gives the team good balance.

But Bellerin is maturing defensively too, and considering he is just 20 you can expect his defensive game to improve further.

How good can Bellerin be? Share your thoughts below.

Podcast: The big problem at Arsenal identified as Gunners ‘stop the...